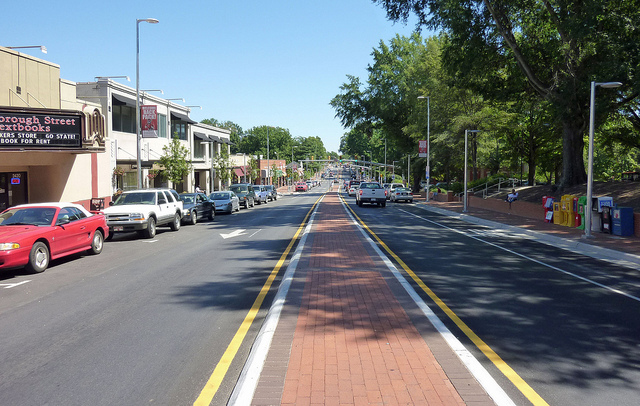 Hillsborough Street has many crosswalks.

There are quite a few parties interested in the revitalization of Hillsborough Street. However, depending on whom you ask, there are many different ideas of what the street should look like in the future.

The street is “a major gateway to the city,” said Jeff Murison, executive director of the Hillsborough Street Community Service Corporation (HSCSC). “The area is extremely valuable second only to the downtown core.”

Murison’s group is tasked with making the street a destination, improving the business climate, and providing more value to the area.

Due in part to the group’s work, signs are positive for Hillsborough Street. More new business is settling in along with an increase in office inquiries compared to previous years, according to Murison.

All parties have shown support for these successes, but recently a divide has started over new developments in the area.

Valentine Commons, a 10-story private student housing building, has now opened and Stanhope Village, office towers with ground floor retail, is planned nearby. These projects have brought the discussion of density and urban form to the forefront.

Nearby neighbors have voiced concerns about the new towers and the amount of density they bring to the street. A decision by the City Council earlier this month ended the controversy, which focused on the amount of floors in the building, not the height. The Stanhope building will have five floors and stand 75-feel tall, as opposed to the seven stories developers wanted to put in the same height building.

Members of the neighborhood say that this change is in line with Raleigh’s Comprehensive Plan. But in this particular instance, the plan is vague and open to interpretation.

The plan’s listed category for Hillsborough Street, neighborhood mixed-use, suggests that services here are only to serve the immediate residential area, but could also serve as a “main street” type destination supporting higher density and walkable streets with nearby mass transit stops.

So, the Comprehensive Plan is not specific enough to guide the growth.

For the city to get the best value out of investments here, urban form and compact buildings would be the best route.

No one knows more about the return on investment in urban areas than our own Chief Planner, Mitchell Silver. “The ROI principle holds true for locations like Hillsborough Street,” Silver said in an email.

Without major investments, perhaps to the scale that downtown Raleigh or North Hills has enjoyed, to push the street toward a more urban personality, Murison and his team face immediate challenges.

For example, providing adequate parking for a car dependent area is difficult within a business area that is so narrow.

With low density zoning to the north and an institution, N.C. State University, to the south, creative or expensive solutions will have to be planned for this area.

“For developers the cost of parking is second only to the high cost of the property on Hillsborough Street,” Murison said .

Until a set vision for the street is in place, only so much can occur.

If Hillsborough Street is truly to be a part of the growth nodes identified by the Comprehensive Plan, all interested parties may need to agree on a vision for the street, urban center or residential neighborhood.