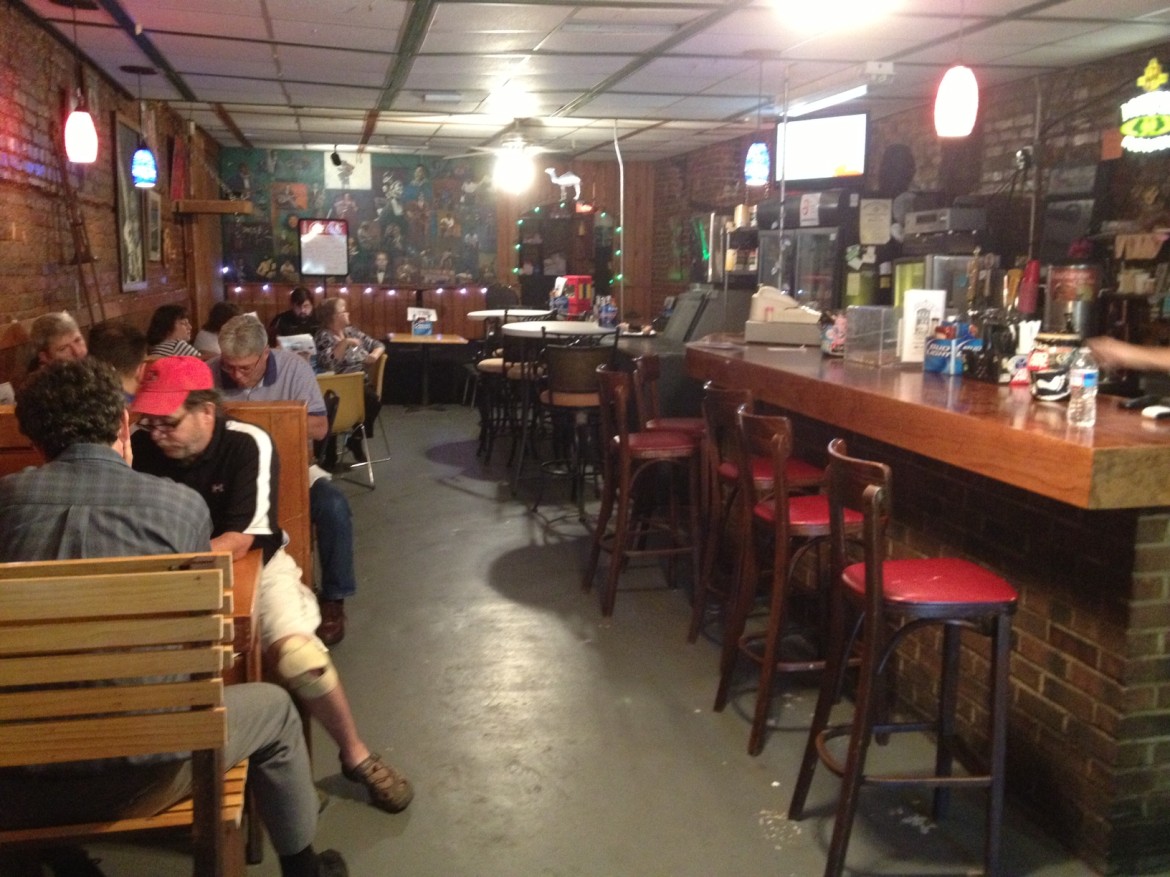 Raleigh author Scott Huler is on the hunt for a new weekly lunch spot now that the Berkley is closed. Sometime during the first week of my employment at the News & Observer back in 1992, a troop of the features reporters — yes, plural, this was back in the days when there were multiple reporters — took me to the Berkeley Cafe for lunch. The Berk, on Nash Square, you probably know, is the kind of dark, low, grungy, interior type of place that makes the best bar imaginable. Long bar; low ceilings. Christmas lights all year long. Ceiling fans you had to duck. For a long time an extra room where you could play pool or be extra loud. We had whatever kind of burger was on special, soaked up endless refillable teas and soda pops, played pool.

And started a tradition. The Berk has been a great blues club, a great downtown divey lunch spot, and a great journalists’ hangout — back when there were journalists. But above all, it became a place where me and my best friend had lunch. Every week. Since then.

For twenty years. We have been going to the Berkeley for lunch. Mind you, it hasn’t always been easy. Like anyplace with a shifting cast of characters, the Berk has gone up and down in character, in pleasantness, in quality. At times — including now — the Berk has delivered the definition of good bar food: greasy, homey, comfortable. The kind of food where you forgo the mayo as a gesture towards health, but you, the server, and the cook all know that that borders on the absurd. At other times it has been suggested that the motto of the Berk ought to be “Bad food, served badly” — and we went back every week. And now the Berk is leaving me. It’s closing at the end of September for some kind of vague period of remodeling or rebranding or re-something else; current story is it will reopen as the next version of Sadlack’s, which is a great thing. I have no doubt the doors will open again and I have no doubt I’ll enjoy whatever’s there when it does. But the Berk, as I have known it, will be gone, gone for good.

But heartbroken as I am, I choose to see this as an opportunity rather than a catastrophe. So. Downtown Raleigh restaurateurs, take note. Two lunch free agents have entered the market. We are not big spenders but are as regular as grandpa’s clock. We tip the requisite 20 percent — if he’s a man, we appreciate the server’s good service; if she’s a woman, we want the server to like us. We fill up, redeem, and start again with get-the-tenth-lunch-free cards. We talk to the staff, talk the place up, even lend a hand when needed. I used to go behind the bar and get our own soft drinks when the place was busy. When a motivated waitress covered several of the tables with customer photographs, I was in some of those photographs. So were my friends — and even the birth announcement of my oldest son. I kissed one of those waitresses one time.

And again — it’s all going away. And once a week my friend and I need to find somewhere to have lunch.

So — Raleigh, downtown: eateries, bars, lunch counters, dives. What are we bid? Who wants to absorb two aging free agents? You’d have to say as lunchtime ballplayers we hit for average rather than for power, and our waitress-squeezing days are probably behind us (I say probably — you never know how a change of pace can perk up a late career). But we’re an asset to the team, keep the bench loose, lend some locker-room experience. Know how to act, literally, like we’ve been there before.

We’re looking for a spot; looking for a deal. We’re available. You can reach out to our agents and make an offer. Or, hell, you can just let us transfer these eight Xs on our last Berkeley card onto your customer card and we’re probably yours. Just save us a table at the back.

Anyhow, we’ll see you next week, at the —

We’ll see you next week, some damn where.