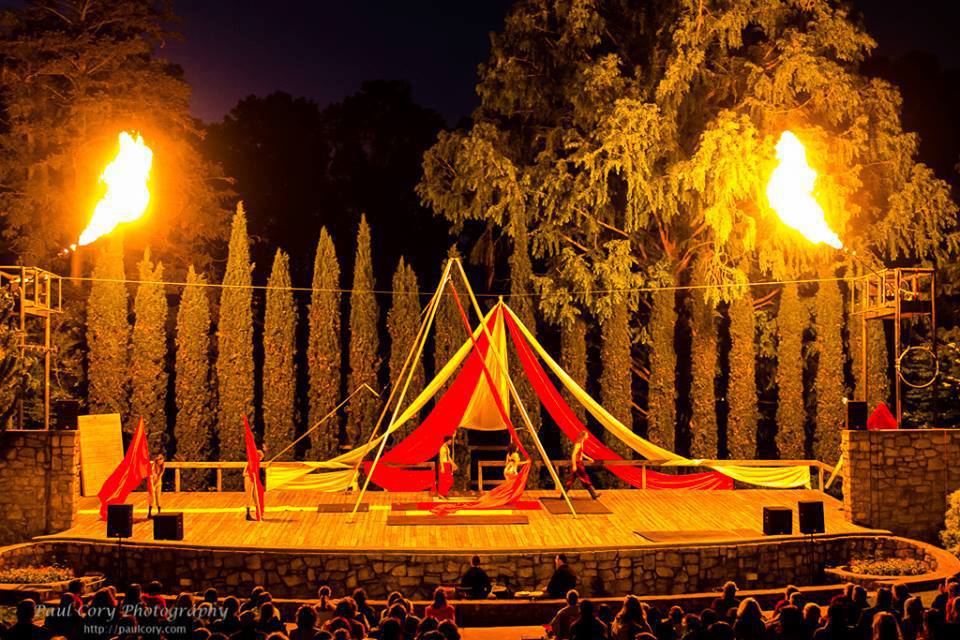 Barre Theatre puts on an outdoor performance of "Comedy of Errors" in May 2013.

Charles Phaneuf is the executive director of Raleigh Little Theatre. The City Journal column is part of Raleigh Public Record’s continuing efforts to let the people of Raleigh tell their stories in their own words. Send your ideas to editor@raleighpublicrecord.org. We want to hear ideas, stories and anecdotes about life in a growing city.

We have started a movement, and it involves bringing a couch to an outdoor performance.

Like most good movements, it wasn’t one person’s idea alone. One of our neighbors started doing this last summer, when he and his roommates would carry their couch to each production and stake out their spot hours in advance. This particular neighbor is a N.C. State alum, and is also a producer of theater and special events. But he’d never been to a production at Raleigh Little Theatre before. Barre Theatre puts on an outdoor performance of Comedy of Errors in May 2013.

What excited all of us, especially Todd Buker, the managing director of Bare Theatre and I, was that it seemed to signify that people thought of this amphitheater as an extension of their living rooms. Besides the obvious difference that, on any given night, there might be 30 or more actors and musicians, backstage and front-of-house volunteers, food trucks and circus performers happening in the amphitheater, but probably not in your living room.

When we printed the postcards for “Two Noble Kinsmen,” a rarely performed Shakespeare play that is running the last two weekends in May, we added this line — “Couches Welcome.”

After three years of inactivity, we now have an outdoor venue, the Stephenson Amphitheatre (named after the first employee of Capitol Broadcasting, Louise “Scottie” Stephenson) in the heart of a Raleigh neighborhood that is bustling with activity. And so far, the neighbors seem to think of it more as an amenity to be celebrated rather than a nuisance. The Zinc Kings appear in As You Like It in August 2013.

People often ask me if it’s getting easier or harder to run a theatre in this area. While our population is growing quickly, there is also a lot more competition. This is true to an extent, but we also tend to think that a rising tide will lift all boats in the performing arts community. In our case, we also have a unique opportunity in a neighborhood that is gaining 750 new apartments in the next few years and becoming more urban in the process. This will certainly present challenges along the way, but the idea of a neighborhood besides downtown that has a full compliment of amenities that create great quality of life — with the arts as a major driver — is new to our city.

At Raleigh Little Theatre, we are hoping that collaborations with our partners in arts and economic development will help make this idea a fully realized reality. In addition to our partnership with Bare Theatre, which allows us to produce outdoor Shakespeare, we have created a new initiative as part of the Hillsborough Street Community Services Corporation to create cooperative arts programming in our neighborhood. This initiative will draw together the visual arts and performing arts organizations in and around the street to help create an entertainment destination. We are also working with Triangle Art Works to strengthen collaboration amongst the 30-plus producing theaters in the area. Barre Theater puts on a performance of As You Like It in August 2013.

It’s an exciting time to run an arts nonprofit in 2014. The larger reason why these producing arts organizations are so important in a rapidly expanding community goes beyond our economic impact, ability to grow more creative, focused young people, and to touch the hearts and minds of people of all ages. It’s about building community.

Jerome Davis of Burning Coal Theatre Company made this point more eloquently than I could in his program notes for their recent production of The Jesus Fund.

“We know that our culture, even many libertarians, believe that the government should at least fund the police, the fire department and the national defense. Each of those agencies are entrusted, metaphorically or literally, with putting out fires… [Theatre], at the very least, is capable of doing something that none of those other core social safety nets can do: make sure those fires never start, build up a citizenry that, in effect, live by ‘the Golden Rule.’”

We hope to see you at a show sometime this summer. And we would love it even more if you brought a love seat!