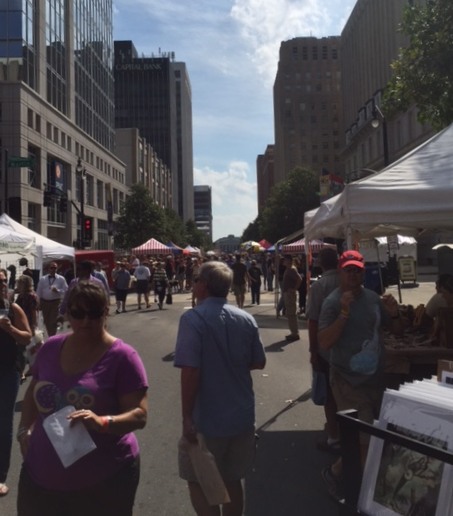 For the second year in a row, the Wide Open Bluegrass Festival made Raleigh its home. The two-day festival, held October 2-3, brought in an estimated 150,000 people.

With more than 85 groups performing on more than six different stages, there was no shortage of entertainment in lively downtown Raleigh.

Bluegrass fans from around the country flocked to Raleigh for the event, as well as a handful of international enthusiasts, coming from New Zealand, Greece, and Switzerland, to name a few. Many seasoned fans sported faded T-shirts from other festivals as trophies of their devotion to the music.

Others could be seen buying new shirts for future relics. There was a lot of gray hair at the festival, but a nice turnout for the younger crowd as well. The first day of the festival coincided with “First Friday,” a monthly social gathering celebrating local art, which drew even more young people in.

Raleigh doesn’t exactly come to mind when people think of “Bluegrass Country,” so many Raleigh natives were able to discover and explore the more traditional genre of music. Luke Owens, the executive chef at the Morning Times, was exposed to the music for two days outside the restaurant doors. Owens, 27, admitted to being unfamiliar with the genre, but said he was pleasantly surprised. This sentiment was echoed by the many young adults brought out by festival’s night shows.

Local restaurants welcomed the festival with open arms, offering food and drink specials during the event.

With stages right outside of historic restaurants like Mecca and Raleigh Times, fans found a convenient place to settle for the day. North Carolina craft beer was twenty feet away, and if you were hungry, you could even get a Cajun shrimp po’boy with “bluegrass slaw,” courtesy of the Raleigh Times.

Local restaurants weren’t the only option. Food trucks, food tents, and any other structure that could house food lined Fayetteville Street from the Capitol Building all the way to City Plaza.

Beer trucks were also peppered throughout Fayetteville Street, offering a sampling of local craft beer as well as popular domestics. Those who were mildly interested in the  bluegrass culture found themselves at the moonshine tasting tent. Coming from experience, I can assure you it was worth the twenty minute line.

Raleigh is home to other festivals, such as Hopscotch, but the Wide Open Bluegrass Festival provided a sense of community unrivaled by others. A street band performs at the Wide Open Bluegrass Festival

Many people brought their own instruments, and jamming with strangers was as common as giant beards on the streets of downtown Raleigh. One thing that really brought people together were the dance tents.

Yes, literally empty tents where people could dance to the music. These tents, with the help of moonshine, created a stimulating environment that was as enjoyable to watch as it was to participate in.

The talent at the festival was undeniable. Big names, small names, and even no names performed.

The variety of styles was impressive as well, ranging from old clawhammer to “newgrass.” Each performance possessed an air of cultural sophistication, but still preserved the simplicity and lighthearted setting one would expect from a bluegrass concert. Every act captured the audience in a different way, whether it be the odd fashion choices by The Outliers, or the soothing voice of Laney Jones.

Each group expressed their gratitude and excitement to be part of the festival. Even Yonder Mountain String Band seemed humbled on the big stage at Red Hat, which didn’t quite sell out, although the fences were lined with spectators hoping to catch a song or capture a video.

Luckily, Raleigh has at least three more years of this to look forward to, as part of their five year contract, and possibly more if the festival continues to impress. It’s a great cultural event that brings all types of people from around the world.This festival is important for Raleigh, making it a destination, and reinforcing the culture that makes the city so welcoming.