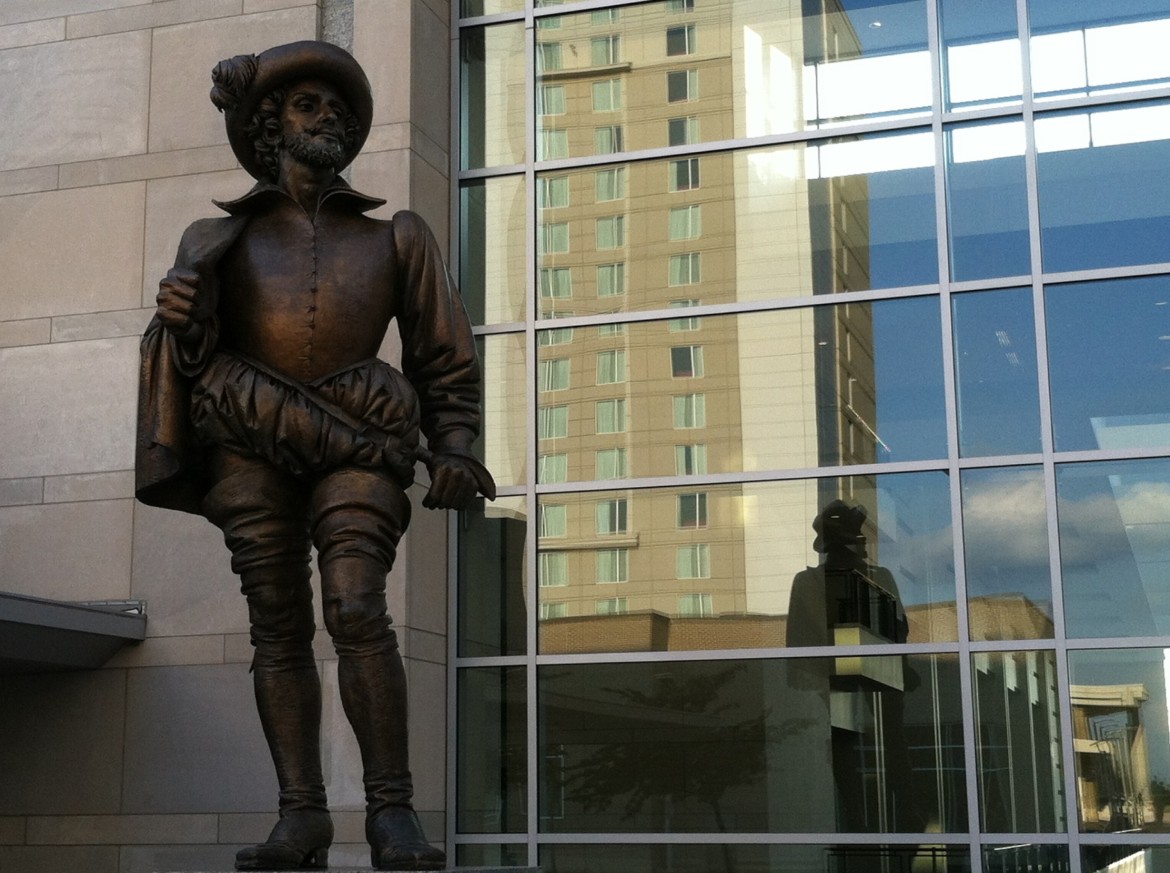 A statue of Sir Walter Raleigh stands outside the Raleigh Convention Center.

Walter Raleigh stood on the scaffold in the Old Palace Yard at Westminster. A block of wood lay at his feet and an executioner stood next to him with an ax.

Raleigh looked out over the crowd that had gathered to witness his violent death.

He looked at his executioner and examined the ax that would be the vessel of his demise.

“This is a sharp Medicine, but it is a Physician for all diseases and miseries,” he reportedly said. “Let us dispatch. At this hour my ague comes upon me. I would not have my enemies think I quaked with fear.”

Raleigh bent down on his knees, placed his head on the block and demanded his demise be quick: “Strike, man, strike!”

Did Raleigh ever wonder, as he stood up there on the scaffold, facing mortality at the end of an ax, just how he got there?

Sir Walter Raleigh, as seen in his statue outside the Convention Center.

Sir Walter Raleigh was man of many talents — explorer, navigator, poet, tobacconist, lover of women — but he suffered the fate of many in the English court during Elizabethan time.

When a new monarch took the throne, often the old allies were deemed enemies and, subsequently, imprisoned until they were seen as no longer a threat.

Or they were just beheaded summarily.

Raleigh’s execution was seen as a harsh punishment, a travesty of justice, based on trumped-up charges.

So how did Raleigh end up on the scaffold at the Old Palace Court on that late October day in 1618?

Ironically, his fall from the good graces did all start with a lady.

Raleigh was favored in the court of Queen Elizabeth I, but he fell in love with one of her ladies-in-waiting and secretly married her.

That lady, Elizabeth Throckmorton, went about her business in the court of Elizabeth, and so did Raleigh. But when Queen Elizabeth, also known as “the Virgin Queen,” found out about the marriage, she threw them into the Tower of London for a few months.

Raleigh and Throckmorton were released and lived as husband and wife; she bore Raleigh a couple of sons, and he continued on his exploration pursuits, especially against the Spanish.

To Virginia and the Lost Colony
But before all that, Raleigh had a plan to colonize the land across the Atlantic Ocean known as “Virginia.”

Named for the ruling Virgin Queen, Virginia was seen as a land of opportunity for English traders and settlers, and Raleigh was going to cash in, by funding the expeditions himself and with friends.

In 1584, he sent Joachim Gans, a Jewish mineral expert from Bohemia, and a small military expedition to Roanoke Island to research how the local native tribes smelted copper, so as to improve European techniques.

There, the colonists established relations with local native tribes living on the island, the Croatans and Secotans. Two native men, Manteo and Wanchese, made the return trip back to England to meet with Raleigh about the land around Roanoke Island and its people.

Interesting side note: Gans is considered the first Jewish person recorded to live in North America.

Raleigh dispatched a larger expedition, lead by Sir Richard Grenville and Ralph Lane, in April 1585, but it failed to establish a colony on the island.

Three years later, in 1587, Raleigh sent a second expedition, with 150 colonists, this time, with women and children, to establish a permanent colony at Chesapeake Bay.

The expedition went to Roanoke Island to rescue Grenville’s men, but they found no one there, save a skeleton. The fleet commander refused to continue, so the colonists, lead by John White, built shelter and re-established relations with the Croatans.

But the situation became untenable, when a colonist was killed by hostile tribes while crabbing in the Albemarle Sound. It was the same natives that Ralph Lane fought during the previous expedition.

Desperate for help, White left the colony, including his newly-born granddaughter, Virginia Dare, and headed back to England to explain the situation to Raleigh and to bring back supplies.

But a war between Spain and England delayed his return for three years. When White returned in 1590, he found nothing left of the colony — or of his family and granddaughter.

White took these to mean the colonists were with the Croatan tribe at Croatan Island, on the Outer Banks (later known as Hatteras Island). But a storm prevented a search out to the Banks, and after the storm cleared, they left.

Raleigh’s attempts to colonize Virginia failed, but his expeditions did bring back tobacco, maize and potatoes to the British Isles. Raleigh convinced Queen Elizabeth to smoke tobacco from a pipe, like the natives in Virginia had smoked it with the colonists.

Cultivation and use of tobacco spread far and wide across England, thanks in part to Raleigh and his expeditions.

When Elizabeth died in 1603, and James I took power, Raleigh found himself on the outs with the court. He was arrested and brought to trial for allegedly taking part in a plot on the king’s life.

Raleigh maintained his innocence, denouncing the accusations against him as hearsay, but he was found guilty anyway. King James spared his life, however, and sent him away again to the Tower of London, where he stayed until 1616.

When he was released in 1616, Raleigh went on an expedition to Venezuela to search for the famed lost city of gold, El Dorado. On the way, the English sacked a Spanish outpost.

For that, the Spanish ambassador demanded that Raleigh’s commuted death sentence be reinstated. To keep peace with the Spanish, James agreed.

From Explorer to Capital City Namesake
Despite his failed attempts, Raleigh’s vision of a colony in the New World paned out. The colony of North Carolina took hold in the swampy marshland of the Coastal plain and spread west.

The colonial capital was at Tryon Palace, in New Bern, but after the Revolutionary War, North Carolina didn’t have a permanent capital. The General Assembly would meet in random places around the newly minted state — in Hillsborough, Fayetteville, and at the Wake County courthouse.

There were several bills introduced in the General Assembly to establish a capital city, but, much like today, there wasn’t consensus to get it passed.

In 1788, the Constitutional Convention, charged with writing the state’s ruling document, came up with a resolution to establish the capital within 10 mile of Isaac Hunter’s tavern, a well-known watering hole and meeting place on the roads from the coastal plain to the backcountry.

By 1792, the General Assembly ratified the convention’s plan and named the new capital city “Raleigh” as “the permanent and unalterable seat of the government of the state of North Carolina.”

The General Assembly named the city after Sir Walter Raleigh, a man who never set foot in North Carolina.

Incidentally, this was the second place in North Carolina named after Raleigh. When he sent John White to Roanoke in 1587, he instructed him to build a fort and name it “the Citie of Ralegh in Virginia.”

The fort was established, but later was lost, and is now known as “the Lost Colony.”

A statue of Sir Walter Raleigh stands outside the Raleigh Convention Center.

Raleigh’s Legacy
In front of the Raleigh Convention Center stands a larger-than-life statue of Sir Walter Raleigh. The statue has moved several times in its life.

Raleigh’s life was always one of adventure and progress, of opportunism and seeking fortune. His namesake city is no different.

As a poet, Raleigh wrote simply and directly, sometimes adhering to the pastoral style that was popular among the poets of the period, namely Christopher Marlowe.

He also challenged the status quo and spoke truth to power in his poetry.

One of his best-known poems, “The Lie,” speaks directly to the corruption of institutions and opens like this:

Go, Soul, the body’s guest,
Upon a thankless errand;
Fear not to touch the best;
The truth shall be thy warrant:
Go, since I needs must die,
And give the world the lie.

Raleigh has never been a typical Southern city, and it really isn’t today. Whereas Charlotte, Atlanta and Richmond all relied on particular industries to define them, Raleigh has always been an odd and extraordinary outlier in the South.

A true capital city, where people meet to expound on ideas and get things done, then have a good time, much like they did back at Isaac Hunter’s tavern nearly three centuries ago.

Raleigh, himself, was an odd and extraordinary man in history. If he could walk down Fayetteville Street today and see what sprang up from his name, he could be proud.