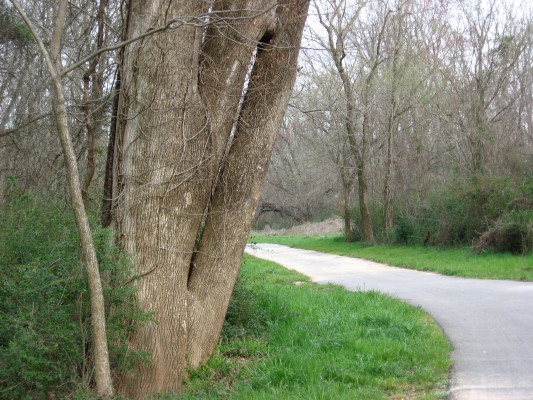 With about 100 miles of paved trails and more on the way, the Capital Area Greenway system is a growing. Raleigh Public Record invites you to get outside and explore this ever-expanding trail system.

Download the latest map of the full greenway network. [pdf]

Initiated in 1974, Raleigh’s greenway system began as small, isolated segments. But in the last 39 years it has grown to more than 99 miles. Encompassing 3,700 acres, the system has developed some connectivity, with several multi-mile stretches. The system is not only reaching areas throughout the city, but is preparing to link with other, larger trails.

As a premier amenity and as a pioneering national model in urban landscapes, the greenway system provides Raleigh with a highly visible symbol of the city’s character. My favorite aspects remain the pure naturalism available to greenway users, and the strong contributions these green ribbons make to our unique relationship with the natural landscape in which our metropolis is ensconced.

Part of the initial impetus for Raleigh’s greenway program was the “strategic use of part of the city’s floodplain for an open space corridor between adjoining land uses.” The quote is from Bill Flournoy, a landscape architect out of NCSU who is called the father of North Carolina’s greenway movement in the “Greenway History” by Charles A. Flink.

Northwest Raleigh has generous stretches of greenway aligned with the flood control lakes – Lynn, Shelley and others – built to protect Crabtree Valley. Almost all of the greenways follow waterways – and thus many of them literally track the sewer systems as well. But the occasional outgassing pipe is well worth the rich array of birds, diverse plants, and the occasional mammal you will see.

Preservation of significant, if narrow, strips of natural areas will be a legacy to future Raleigh citizens as well as a highly valuable amenity now.

While driving a car around Raleigh, you’ve most likely been near a greenway without even knowing it. “Where are the greenways?” is a common question asked by Raleighites and a team of data fans built a service in hopes to answer that question.

As part of CityCamp Raleigh, a team of citizens created RGreenway, a mobile application that helps users find and navigate the Raleigh greenways. In addition to a map browser, the application uses a smartphone’s GPS features to show you where the greenway continues at intersections and road crossings.

The application comes with many other features as well. RGreenway has a social component with the ability to check-in to trails and share it on different social media sites. The popular SeeClickFix application is used also for easy reporting of issues such as trash or needed path maintenance. Fitness and weather information has also been added.

The application is available for Android and iOS devices.