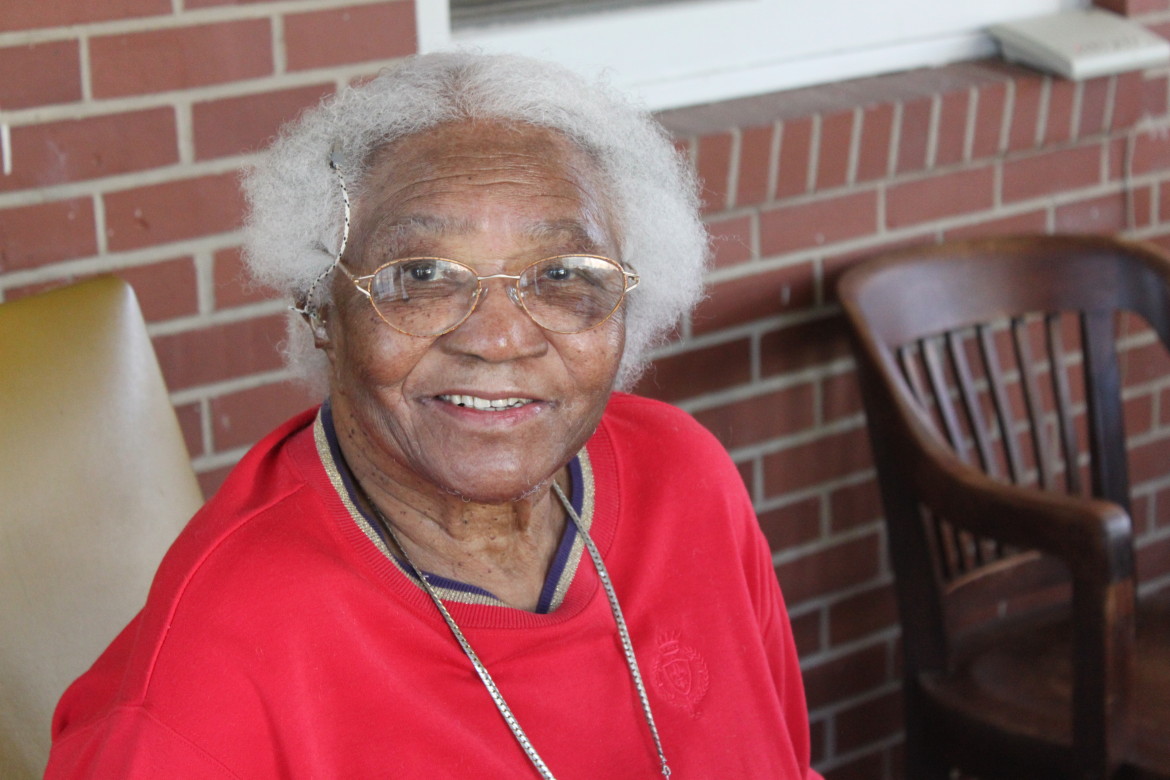 When someone was in need, Julia Smith helped.

White or black, man or woman, child or adult, rich or poor, stranger or kin.

Smith, age 97, spent her life serving others as a nurse at St. Agnes Hospital and later, WakeMed. When children came to Tuttle Community Center without a lunch, Smith cooked up the lunch program that still exists today. And when a friend needed help collecting the U.S. Census in 1950, Smith did that, too.

Most of her work happened during the period of American history marked by the Jim Crow laws. African Americans were separate in every aspect of life.

But nothing fazed Ms. Smith. Her mission was to help all people.

“You had to do what was right. You took care of patients. Integration had not been thought about and we didn’t pay attention,” she said.

Smith, a long-time resident of Southeast Raleigh, was the first of her family (of 10 kids) to go to high school, leaving the farm 15 miles outside Columbia, S.C. at age 12 to live with a cousin in the city.

When recruiters from St. Augustine’s College of Raleigh visited her high school, and she learned about the nursing program at St. Agnes, she took a job babysitting to earn tuition money.

She was ridiculed for leaving home to work. People thought her a little country girl.

“I wasn’t considered. People thought I was just a nobody,” she said.

In November 1934, she cried herself all the way to Raleigh on a train. But that didn’t last long. Nursing school had an intense schedule that began at 6 a.m. and ended after 7 each night. The only breaks afforded short trips to the 5- and 10-cent store downtown or the theater on Salisbury Street. Black people sat on the third floor, whites on the first.

“We didn’t know anything about the civil movement at the time,” Smith said. “We did what we had to do. We were fine. We were well fed. We had comfortable housing, and in fact, I had better housing than I’d had in my life.”

St. Agnes Hospital and the nursing school were first opened in 1896 by the historically black college, with funds raised by Sara Hunter, wife of its principal.  Prior to it, African Americans had access only to a small hospital at Shaw University, where students at Leonard Medical School trained and served patients. But there was a great need for more care.

From 1904 to 1909, St. Augustine’s students built the facility that sits today roof-less and waiting for redevelopment on Oakwood Avenue next to St. Aug’s. It had 75 beds, and a nurses’ home adjacent.

For some time, St. Agnes was the only of its kind between New Orleans and Washington D.C., training nurses who would provide care throughout the South and welcoming African-American doctors as interns and residents when white hospitals refused them. In 1943, the hospital received federal aid to train African-American nurses for service in World War II.

When the hospital was strapped and seeking funds in 1922, Bishop Joseph Blount Cheshire of the local diocese wrote:

“Many schools in and about Raleigh offer educational advantages to the young colored men and women. There is only one St. Agnes. No other hospital of a like character and capacity is available for our colored people who stand in need of medical and surgical treatment. It holds out its helping hand to old and young. It has little or no endowment but it endeavors not to turn any poor man or woman away. It is believed to be the largest and best equipped hospital exclusively for colored people in the country south of Washington.”

Smith left the hospital for a period after graduating nursing school. She worked at hospitals in Wilmington and Tampa, Fla. and as a private nurse back in Raleigh after she married in 1940. During the war, she moved with her husband to Pittsburgh and then traveled back to Florida to care for patients there. She returned to St. Agnes in 1955.

Smith became known all over Raleigh—she’d care for patients at their homes. They’d move into hers for care.

With the money she made, she built her parents a better house back at the South Carolina farm.

“I have done things that few people get the opportunity to do. I’ve cared for people,” she said.

Smith has been recognized among the best nurses to work at the hospital, said Irene Clark, a St. Agnes historian.

“She has an outstanding reputation for working with babies, children as well as adult patients,” Clark said.

When the hospital closed in April 1961, Smith was tapped as a head nurse in the pediatric wing at the new Wake County hospital on New Bern Avenue, now WakeMed.

She’d be among the last of the St. Agnes staff to serve patients in the old hospital, and the first to care for babies in the African American wing at Wake. Smith manned the maternity ward on the third floor by herself that first week at Wake, caring for the first baby, a preemie.

“The state of North Carolina required they had a registered nurse take care of that premature baby, and I was the only one in sight,” she said.

By the time Smith retired from nursing 16 years later, Wake had long been an integrated facility. But even at its start, Smith remembers it as a place where people of all kinds worked together and respected each other.

“We didn’t even consider whatever race or color they were. We took care of patients. That was true of the white nurses as well as me,” she said. “We had the opportunity to serve all people.”