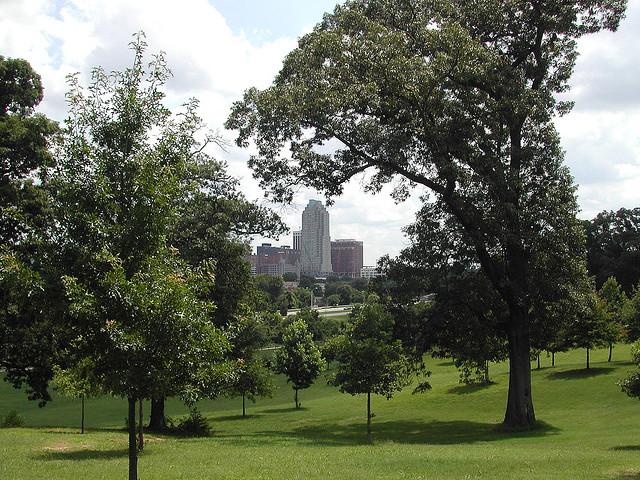 Editor’s Note: This is a follow-up to our recent story about the Dix bill.

Filed less than two weeks ago, a bill condemning the lease between the state and the City of Raleigh for the Dorothea Dix property passed the state Senate Tuesday on a vote of 29-21.

Amended from its original form, Senate Bill 334 now includes language addressing the potential for any lawsuits which may arise from its passage.

Although the bill cites an 1848 law as part of its justification, it also makes reference to 19th-century deeds for the property which opponents to the lease say align with the bill’s goals.

The Original Deal
The first deed was signed on June 4, 1850, between local resident Sylvester Smith and a six-member board of unpaid commissioners charged with establishing a mental institution. All six are named in the deed as purchasers of the 128 & 7/8 acres of land for the sum of $1,417.63. Adjusted only for inflation, this number rises to more than $38,000.

After acknowledging the sale, Smith did, according to the deed, “give, grant, bargain and sell, convey and confirm to the fair [men of the commission] on aforesaid their heir and assigns, and to the survivor or survivors of them and the heir and assigns of such survivor in trust for the use and benefit of the North Carolina State Hospital for the Insane the following patch or parcel of land…”

The exact meaning of this language remains unclear. The bill’s proponents have cited the final section as evidence that the lease with the city, by not designating its proceeds towards mental health, is in violation of the intent of the original deed for the property.

However, the dated legalese does not appear to point to any specific deed restrictions, which would legally bind the land to a specific purpose.

An example of such a deal can be found in Raleigh’s Pullen Park. The land was gifted to the city by Richard Stanhope Pullen under the condition that it be used as parkland, and any violation of this will void the park’s 1887 deed.

Deeds Through the Years
Subsequent deeds for additional parcels on the Dix property in 1857 were not signed with the board of commissioners as the grantee — in legal parlance, the buyer — but rather with “The Insane Asylum of NC.”  In 1907, when 1,155 acres were purchased from the widow Elizabeth Grimes, the grantee is listed as the “NC State Hospital at Raleigh.”

It could be interpreted, then, that because the entity once known as “The Insane Asylum of NC” did not exist in 1850, the deed was signed over to the board of commissioners in its stead. When the deed states that the land is being sold to the commissioners in trust for the use and benefit of the hospital, it could simply mean that the land was not theirs to divide up and do with as they pleased. Rather, the commissioners were in service to the true owner of the land at the time — the Insane Asylum.

The 1907 deed with Grimes, which, unlike its predecessors, was composed with the benefit of a typewriter, does contain specific restrictions for the property. It says the land is to remain “free from all liens and incumbrances [sic],” and stipulates that “the State Hospital at Raleigh, its successors and assigns, shall quietly enjoy and possess the land.”

Regardless of what legal entity the various deeds were signed over to, the ultimate owner of the Dix property was always and shall remain the State of North Carolina.

It is unlikely that there are specific deed restrictions on any of the property’s parcels that would prevent them from being used as a public park.

Additionally, any restriction requiring the land host to a mental health care facility would likely have prevented the hospital, originally slated to close in 2008, from shutting its doors in 2012.

Because the asylum was the first mental health care facility in North Carolina, it could be argued that the state’s current mental health care system is the rightful “successor or assign” of the institution noted in the original deed documents. If this is the case, the property may be required in some way to benefit mental health — whether it be through leasing profits or some other means. It would also mean that the state lawyers who drew up the lease contracts overlooked a significant land-use requirement.

A Sweetheart Deal
One of the main gripes with the 2012 lease is that it offered the city a deal that was “below fair market value.” A 2011 study by real-estate firm Worthy & Wachtel determined the land could be worth up to $86 million under ideal conditions, although it set the present market value at $60 million. Still, the city’s lease, worth $68 million over 75 years, would not provide the type of immediate financial windfall that a larger up-front payment from a private developer may.

Although advocates for both the new bill and the original lease agree that any money yielded from the property should be set aside for mental health care, only the bill contains language specifying this requirement.

While it would be possible for the legislature to simply designate that money generated by the current lease be set aside for mental health care, it would, for example, take nearly 22 years before the state collected even a tenth of the cost of the replacement hospital in Butner, which came in at around $138 million.

The state spends nearly a billion dollars per year on mental health care. In the long run, it is unlikely to make a significant difference whether it receives the money for the property now, or over the course of the next three-quarters of a century.