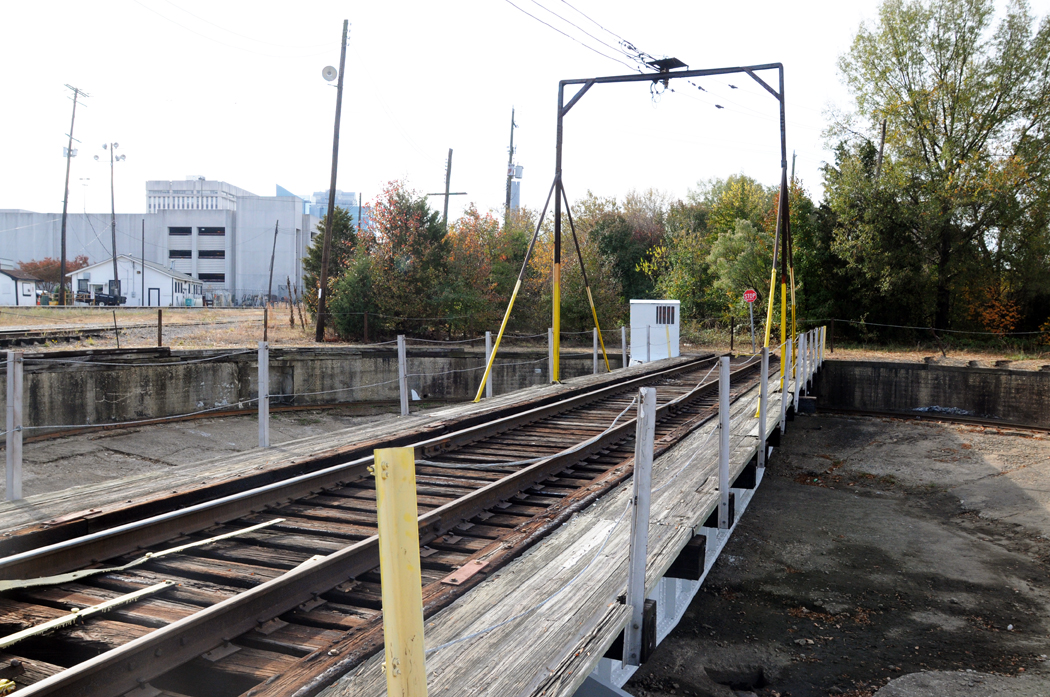 Another view of the turntable.

Editor’s Note: This post has been updated from its original version to clarify and correct some information.

Near the would-be interchange for the new Peace Street and Capital Boulevard bridge sits two remnants of Raleigh’s railroad past.

The Johnson Street roundhouse no longer stands, but visitors to the area willing to duck past a “no trespassing” sign can still see the steam-era turntable that was used during Raleigh’s railroading heyday. Considered a historical resource, the City of Raleigh and the NCDOT had to change some of the plans for the Peace Street and Capital Boulevard bridge to avoid the turntable, parts of which are more than 100 years old.

The Johnson Street roundhouse — named for famous engineer Albert Johnson — is the second roundhouse in the area. The first was built by the Raleigh & Gaston Railroad in 1860. It served the railroad until it was demolished at the turn of the 20th century.

The second roundhouse was built around 1909 after the Raleigh & Gaston Railroad merged with several others to become the Seaboard Air Line Railroad.

The 18-stall brick building included a 100-foot-long turntable that was used to position locomotives properly. The roundhouse was primarily used as a repair shop for steam locomotives. Another view of the turntable.

By the early 1900s, the stub-end station became too small for technology. The small station required trains to back up or pull into it, which didn’t work for longer trains.

During the 1920s, 30s and 40s, private rail companies attempted to work with the City of Raleigh to build a new station that could accommodate longer trains, said Allan Paul, deputy director of the NCDOT Rail Division.

“For various reasons, the City of Raleigh and the private train companies were never able to agree on where that station would be located,” he said. Seaboard Air Line, which had the dominate number of passenger trains coming through Raleigh, decided to take matters into its own hands.

“They got so frustrated that they actually left the old Raleigh Union Station in the late 1930s and would actually board people on their new streamliner passenger trains at that roundhouse,” Paul said.

In 1941, Seaboard Air Line began construction of Seaboard Station, which many Raleighites now associate with restaurants and local shopping rather than an actual train station. The new run-through station opened in 1942 and could accommodate longer passenger trains without backing in or out of the station.

The Death a Roundhouse and a Station
“The Seaboard was one of the first railroads to transition from steam locomotives to diesel locomotives, and roundhouses weren’t very conducive to doing maintenance on diesels,” Paul said.

As with all technology, the roundhouse eventually became obsolete.

The turntable was required to turn the locomotives in the right direction, but new diesel-operated locomotives could operate in either direction. In 1954, Seaboard moved all of its maintenance operations in North and South Carolina to a facility it built in Hamlet, N.C. The Hamlet facility is no longer being used as a repair shop, but it still stands today, Paul said.

After the roundhouse was no longer used for maintenance, it became a storage facility before it was consumed by a fire in the late 1960s. Seaboard Air Line, by then known as Seaboard Coast Line, tore the building down and its remains continue to rest on the property. An aerial view of Capital Boulevard construction during the 1950s.

Seaboard Station served travelers until 1986, when CSX Transportation abandoned a stretch of rail from Norlina, N.C. to Petersburg, Va. and passengers could no longer head north from Raleigh.

Until 1986, Seaboard Station was the only station that served daily, long-distance Amtrak trains heading north. Trains then had to be rerouted — as they are today — through Selma and Rocky Mount before heading up toward Washington, D.C.

The station was abandoned, and all passenger trains were sent through the current station on Cabarrus Street, which was built by Southern Railway 1950. The turntable is visible on an old Raleigh insurance map.

The abandoned station sat vacant until the Logan family purchased the property and did what’s called an adaptive reuse. The station became Logan’s Trading Co., which sits there today.

Paul said that Logan’s successful reuse sparked the restoration of the old warehouses that are now homes to businesses such as ACE Hardware and Seaboard Wine and Tasting Bar.

While the roundhouse sits in shambles, the turntable, now owned by CSX, remains intact and is still sometimes used by the railroad and NCDOT. “It’s one of two steam-engine-era electric turntables left in North Carolina,” Paul said. The other is located in the North Carolina Transportation Museum.

He said a third hand-operated table exists and is owned by a private collector in Rocky Mount.