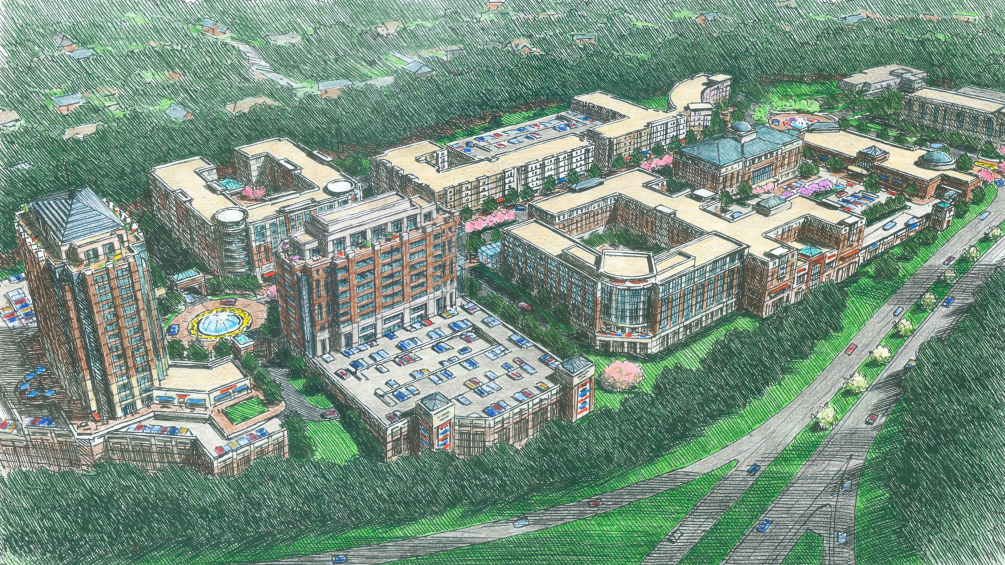 A sketch of the new Glenwood Place mixed-use community

It was standing room only at Monday night’s Glenwood Citizens Advisory Council meeting, where a crowd of more than 50 local residents turned out for a presentation on a new mixed-use development.

The project, Glenwood Place, would be built on the northbound side of Glenwood Avenue just inside the I-440 beltline. A sketch of the new Glenwood Place mixed-use community

Developer Gordon Grubb was on hand alongside a number of his colleagues to discuss the project.

“We’ve owned the property for over 15 years,” Grubb said, noting that many still refer to it as “the old Koger Center.”

“To me, this is a once in a lifetime opportunity to transform 40 acres on Glenwood just inside the beltline from a dated, 70s vintage suburban office park into a very unique, high quality mixed-use community that complements the area and properly welcomes you to the heart of Raleigh.”

Under the existing zoning, Grubb could develop twice the amount of office space currently on the property, in addition to 292 apartments and a hotel. According to current plans, the office buildings would be Class A, the hotel a boutique, the condominiums upscale and the retail unique to Raleigh.

Grubb said the goal was not to create another North Hills or Cameron Village, but rather a “Much smaller, professional mixed-use community with boutique retail. No movie theaters, bowling alleys or Targets.”

One of the aims of the project, Grubb said, was to push the height of the buildings away from the surrounding residential areas and “out on Glenwood and the beltline, where think it’s more appropriate.”

He added that there would be a 150-foot buffer between the proposed development and the existing County Club Hills neighborhood.

Despite the large turnout, not many residents had the opportunity to ask questions following the developer’s presentation on Glenwood Place. Those that were able to raised concerns over the potential traffic impact, particularly on Glen Eden Drive, and the possibility that the development would lower their property values. A traffic analyst was on hand from Stantec engineering, who assured residents that they had taken several steps to ensure the traffic impact of the development would be minimal. By adding retail and dining options, employees working in the development’s office buildings would be less likely to leave the property during lunch, reducing traffic during a heavy time.

Grubb noted that there would not be a cut-through from the development to the Country Club Hills neighborhood it borders. His company would fight any attempt, he said, to create a road between the two.

“We’re going to develop it right, we’re going to do the highest quality we can possibly do, I’m proud of every project I’ve ever worked on,” Grubb said.

A vote on the project will be held at the next meeting of the Glenwood CAC, scheduled for March 23. Following that, a decision will be made by city council on whether to approve the rezoning.