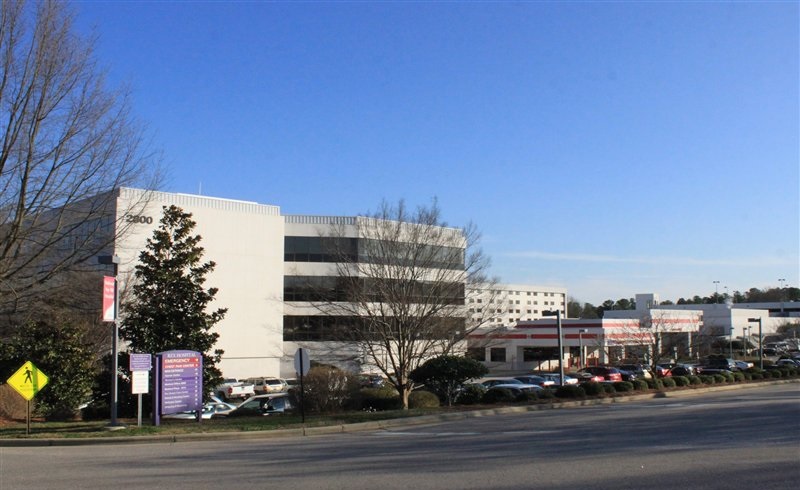 Rex Hospital will be upgrading its chiller system

Welcome back to another edition of the daily Development Beat. Friday the 13ths don’t come around too often, although, according to some nerd with a web site, the 13th falls on Fridays more often than any other day of the week. 688 times over 400 years to be exact.

Unfortunately, there were no campgrounds, no potion shops, no magic stores, no haunted prisons or sacred Indian burial grounds permitted for renovations last week, so we don’t really have any projects that fit this spooky day. Rex Hospital will be upgrading its chiller system

Although, it just so happens that Rex Hospital is spending nearly $4.4 million dollars on a chiller expansion at its Lake Boone location. And? You may be asking yourself, what has that got to do with Friday the 13th? No, the job won’t be handled by Voorhees Construction (motto “We slay the competition”) or anything fun like that. Jason Voorhees from the Friday the 13th movies

The connection — however small — is that there’s a cable network called Chiller that specializes in horror, suspense and thriller programming. Although for some reason, they are playing dreck like “Airborne” and “Troll Hunter” today instead of any of the Jason movies. It’s a sad world we live in.

Also permitted last week: renovations to the Hollister & the Lane Bryant at Crabtree Valley Mall, the Atrium Grille on Blue Ridge and the Wake County General Services Administration Building on Capital Boulevard. The renovations at the GSA building total a little more than $140,000 and will be handled by Salisbury & Moore Construction.

The biggest permitted renovation of last week – by far – was for the NC Electric Membership Corporation on Sumner Boulevard near the Triangle Town Center Mall. The contractor on the job, Raleigh’s Clancy & Theys, received a total in $11 million in permits on February 2 for work described as additions and alterations.

The membership corporation is made up of several member-owned, not-for-profit power companies. Its three story, 40,000 square-foot headquarters were initially built in 1984 after it acquired the land a year earlier.

It may seem odd, that a non-profit, “member-owned” organization has $11 million to drop on office improvements, but considering the age of the building, it should come as no surprise that some costly upgrades are in order. Aside from that, the cooperatives provide services to more than 950,000 households and businesses across the state, so they’ve gotta be pulling in at least enough cash to make sure their office doesn’t fall apart.

Aside from the Fairview Row at Five Points project we discussed Monday, two other new buildings were granted permits last week — a storage facility and a medical office building.

OK — so it wasn’t a new facility so much as an add-on to an existing one, but it’s an all new two story, 17,696 square-foot building all the same. Security Self-Storage, also known as Storage Raleigh/NCSU on Tryon Road near the border with Cary, will be shelling out $525,000 to Westpine Builders for this addition to their facility.

The other new building permitted last week — its formal name is the Rare Oberlin Investments Medical Office Building — will be located (no surprise) on Oberlin Road near Cameron Village. The three story, 17,636 square-foot structure will also include parking. Gurkin Construction will be overseeing the $1.7 million project. A site plan for the new medical facility It’s a very special Teardown Tuesday here today on the Development Beat, as permits have finally been issued for the demolition of the Milner Inn.

Attached to the once-legendary Foxy Lady gentlemen’s club, the Milner Inn is a low-slung, one-story structure located on the 1800 block of Capital Boulevard.  Although the city has been working to acquire the property along with several adjacent structures for years, it only finalized the Milner Inn purchase in October of 2014, when it paid $830,000 to the Earle Ronald Milner Trustee.

It bid out the demolition contract a month later, which was eventually awarded to the Janezic Building Corp for $180,876. The contract entails “asbestos abatement services, structure demolition and removal of the parking lot and access bridge that is located on the property.” A rendering of North Boulevard Park

Although the city will eventually turn the space into the North Boulevard Park, which will serve not only as a greenspace of its own but as a connector between existing portions of the city’s greenway trail system. The park will be connected via a paved walkway that will extend from Crabtree Boulevard to Atlantic Avenue.

While many will surely bemoan the city’s loss of such a storied institution, they should do well to keep in mind that the property’s location in a flood zone has led to serious problems for both the former owners and their former patrons. In August, significant flooding trapped more than 30 people inside the structure. Sounds like a blast.

Welcome back to another week of the daily Development Beat. We’ll start off with a look at Raleigh’s newest multifamily development, the Fairview Row at Five Points.

Located in the Five Points area of the city just off Glenwood Avenue on Fairview Road, the final phase of development on the project has just received permits totaling more than $3 million dollars. A rendering of Fairview Row at Five Points

They describe these efforts on their web site:

“[The] Colonial & Federal styled architecture is inspired by the surrounding historical vernacular is carefully woven into the existing neighborhood streetscape.

While the buildings have overall similar form (front porches, flat roofs, etc.), each has its own distinct characteristics such as varying brick colors, paint, window details, porch and column designs, shutters and trim detail. However, they all look, function, and feel authentic…as if they existed from the historical beginnings of Five Points.”

Williams Realty & Building Company will handle the final buildout of the development, as they have all previous phases.