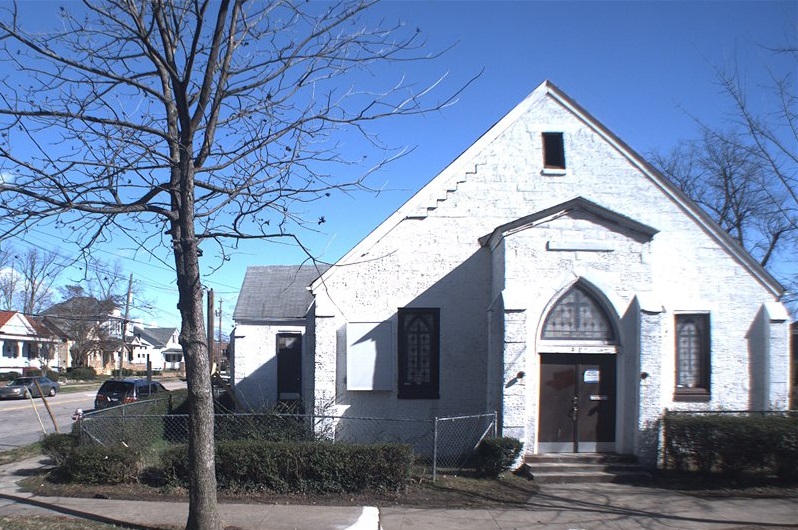 A rezoning case first filed in February 2014 continued to work its way through the system last week in the form of another appearance before the Central Citizens Advisory Council.

Z-28-14 would allow for the rezoning of a .12 acre parcel on S. Person Street. The site has been home to the Seventh-day Adventist Church since 1922, although by the 1980s the original congregation had outgrown the facility. It was used as a place of worship for other churches until 2011, when it was damaged by a tornado and abandoned. Scheduled for demolition, the applicant for Z-28-14, Phuc Tran, stepped in and restored the church.

While the Central CAC has expressed its gratitude toward Tran for saving the historic building, they have raised concerns that serving alcohol could potentially create a public nuisance, and would also go against the traditions of the Seventh-day Adventist faith.

At Monday’s Central CAC meeting, Tran’s attorney, Andy Petesch, explained that any future development would be strictly limited by the covenants in place on the property, which limit it to one-story.

In addition to this restriction, Tran to-date has agreed to several conditions on the property, including a ban on nightclubs, taverns and bars.

Although the case received a recommendation of approval from the planning commission in April, the applicant has been working to accommodate neighborhood concerns before it is brought to a vote by city council.

Petesch said in an effort to allay some concerns, Tran had added several new conditions to the property, including one that would reduce outdoor seating from 75 percent of the indoor capacity to 65 and another that would limit operating hours to 10 p.m. Monday-Thursday, 11 p.m. on Fridays and Saturdays and 9:30 PM on Sundays.

Language was also added in that would prevent a pawnshop or adult entertainment shop from opening on the premises, although Petesch assured those in attendance that neither had ever been even a remote consideration for Tran.

Residents expressed concern that the conditions on the property could be thrown out by a new owner, but Petesch explained that once a zoning case is passed by city council, it becomes part of the city code. In order to remove these conditions, a new owner would have to go through the same rezoning process Tran has.

“My sense is that [a new owner] would be disinclined from going through the rezoning process after having seen the efforts from [Tran],” Petesch said.

Petesch also assured the concerned citizens that the outdoor seating would be on private property, and not on the sidewalk.

Several of those in attendance inquired as to whether Tran would consider restricting restaurants from the property, but Petesch said this was not a concession Tran would be willing to make.

Residents also asked why a more specific plan for the property was not available, as is often the case with site plan and rezoning cases. Petesch said that state law prohibits zoning cases from focusing on a specific project, and that Tran had not yet decided on how he would develop the property.

CAC chair Lonnette Williams voiced some of the frustrations the neighborhood has felt over the project. “We recognize the investment he made in the restoration of that building,” Williams said.

“It should be utilized in a very productive way, but other people have made investments in other buildings in the district as well. More importantly, we need to value how people live in our communities, not just what buildings look like, but how people live.”

Petesch said although the case was scheduled for a potential vote from city council the following day, he was going to ask that it be held over in order to allow for the submittal of the new conditions.

At city council the next day, councilors agreed to give the applicant time to submit the revised conditions, and made plans to address the case at their next meeting.

Should the rezoning case fail to receive approval from council, Tran may be able to develop the property with less restrictions than he is currently offering, as the parcel will likely see its zoning classification change as part of the citywide remapping case currently being reviewed by city council.

Following the meeting, Petesche declined to speculate on what avenue Tran would pursue should the rezoning case fall through, and noted that because the remapping had not yet been approved, it was impossible to say what Tran would be able to develop in the space.