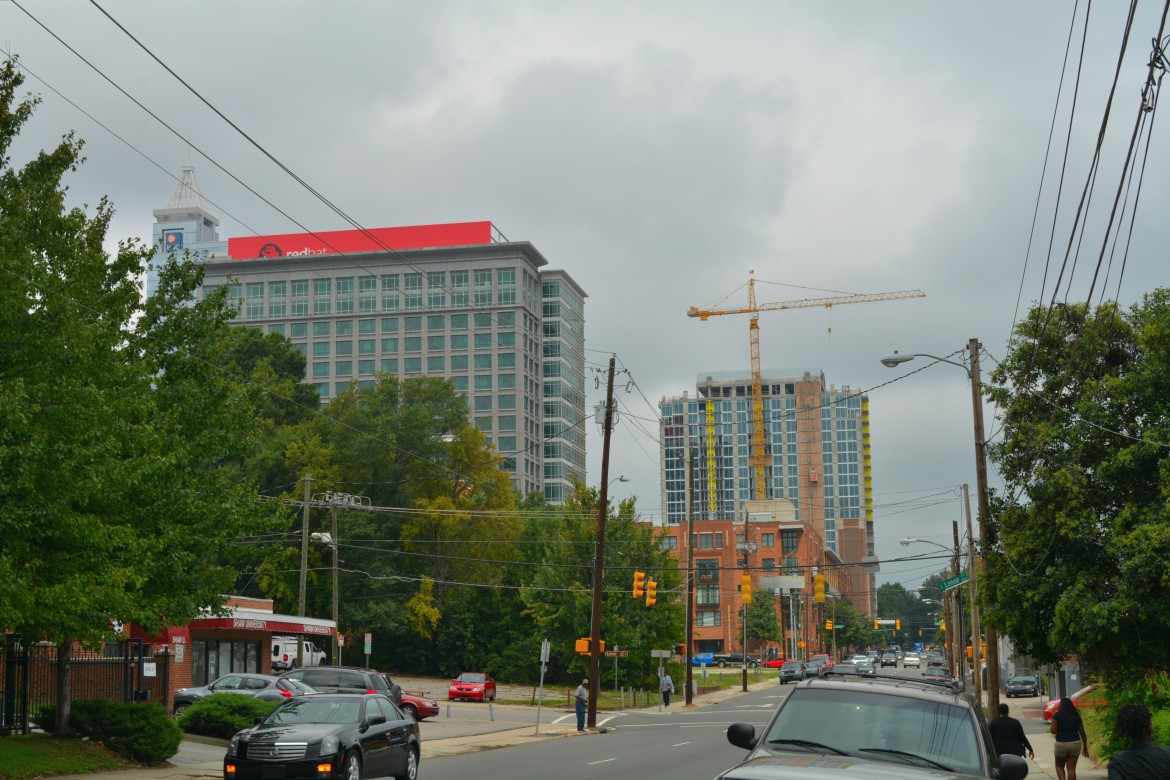 The SkyHouse in downtown Raleigh

At two public hearings over the past few weeks, the citywide remapping has been met with anger and frustration from many of Raleigh’s most vocal residents.

A number of them spoke out against mixed-use zoning districts, while others pleaded with councilors to slow down the process. Some even went so far as to say that the city councilors had lost the trust of their constituents.

In an attempt to understand more about, and clear up some of the misconceptions regarding the Unified Development Ordinance (UDO), the document behind the remapping process, the Raleigh Public Record interviewed two key persons that helped shape the UDO — Ken Bowers, the planning director in the city of Raleigh, and Steven Schuster, the chairman of the planning commission.

Additional research was done into the UDO, future land use map, and comprehensive plan to better understand the historic nature of the undertaking of the citywide remapping.

Lawyers representing developers were interviewed to highlight the opportunities and challenges that developers will face if the remapping were to be approved. The president of the Society for the Preservation of Historic Oakwood was interviewed to hear the views of an affected neighborhood.

This article has the following structure: The relationship between the 2030 Comprehensive Plan, the Future Land Use Map, and the UDO; The important changes between the old zoning codes and the UDO; The purpose of mixed use districts; reactions from lawyers representing developers and the community; and the next steps city council will take on its way to making a decision about the citywide remapping.

The 2030 Comprehensive Plan: The Guiding Document for Raleigh for Years to Come The 2030 comprehensive plan was adopted by City Council resolution 2009-997 on October 7, 2009, with the ideal that the document would become the long-term vision for the city of Raleigh. It describes itself as “a key policy document that helps make the city workable, livable, and prosperous.”

The comprehensive plan was designed, in part, in response to Raleigh’s continuing population growth. According to the Capital Area Metropolitan Planning Organization (CAMPO), Raleigh’s population is projected to increase from 370,000 in 2005 to nearly 600,000 by 2035.

Steven Schuster, the chairman of the planning commission, said in an interview that the Comprehensive Plan calls for increased density due to the rapidly growing population. This is a departure from earlier policies that advocated for an urban sprawl approach.

Almost immediately after the comprehensive plan and future land use map were formed, work started within the city’s planning department to construct the UDO. The intent was to completely rewrite the city’s existing zoning codes. The draft of the UDO took three years to complete.

The UDO: Rewriting the Zoning Code for the Entire City According to Ken Bowers, the planning director for the city of Raleigh, the UDO was vetted at several points, including rounds of review internally, before a presentation to council, before the initial adoption. The date that the UDO took effect was September 1, 2013.

Much of the city is already operating within the framework of the UDO. Many of these areas are zoned residential, and no significant change was needed to convert from the old code to the new code. The rezoning of the 30 percent of the remaining area of the city still under the old code started in 2014 and is known as rezoning case Z-27-14.

According to Bowers, the UDO is about taking a more “formed-based” approach to zoning. Instead of directly regulating density or commercial intensity, the UDO concentrates on building height, so that the development will fit into context within its surroundings.

“The densities are not radically different from what you could do under the old code,” Bowers said.

Under the old code, as long as a developer met the setback requirements, they could build as high as they wanted to. According to Bowers, the new code allows the scale of development and the density to be “worked out by the market.” Another key difference between the old code and the new code is the strengthening of administrative standards for review. Within the context of site plan submittal, the applicant would have to meet numerous legal parameters, including the due process clause of the 5th and 14th amendments of the constitution. The remapping will not, Bowers said, lead to rampant, unchecked development.

“It’s important to stress that the standards of development are stronger in the new code than they are in the old code,” he said.

Development is expected to take place along major thoroughfares within the city, due to the last major change from the old code to the new code — the mixed use zoning district.

The Mixed Use Zoning District: Where You Can Live, Shop, and Work in the Same Place

Mixed use districts allow for multiple uses in one particular development. A common mixed use is having ground-floor retail beneath an apartment complex or an office building.

Within the UDO, uses are assigned to particular mixed use districts. For instance, fraternities and sororities are a permitted use in RX, OX (office mixed use), CX (commercial mixed use), DX (downtown mixed use), and IX (industrial mixed use), but not NX. Under the UDO, fraternities such as NC State\’s FarmHouse would be prohibited in neighborhood mixed-use districts

Bowers said the decision for which uses were assigned to which mixed-use zoning districts came from consultants who studied counties across the country as well as compatibility with past policies.

Steven Schuster said the mixed use district is designed to allow property owners to be able to “work, shop and play in the same area.” He noted while a mixed use district allows for a larger amount of uses, it does not necessarily mean that the site will be developed with greater density.

“While they’re related, they’re not necessarily the same issue,” he said.

The goal, according to Schuster, is to become denser in the right places — downtown, along major thoroughfares like Wade Avenue and Capital Boulevard, in places with a growing population like North Hills. He added that mixed use districts were part of the goals adopted in the comprehensive plan.

Reaction from Both Sides of the Community

The public hearings for the citywide remapping took place over two separate evenings where more one hundred people shared their thoughts. The speakers were a cross-section of the city of Raleigh — black and white, old and young, male and female. Some had questions about their particular piece of property, while two neighborhoods spoke out against development that would take place near them.

Overall, the reaction of those present was anger and frustration. Many felt they had not received communication from the city regarding the remapping until the latest possible hour and had to work through the online document of the UDO, which is filled with technical language, to find clarity. Their frustration with the process was evident. For a copy of the PowerPoint presentation Bowers gave to SCPHO, click here.

On the other side of the fence, developers were not particularly happy either with the changes.

A source who has worked closely with this issue on behalf of a number of developers said many were frustrated with the hard height limit placed in zoning districts across the city. Isabel Mattox, a lawyer who represents developers, said that while the citywide remapping is necessary, mistakes have been made. She says that in her time on the planning commission, they did not thoroughly discuss the concept of frontages.

“Frontages are one of the most difficult aspects of the UDO and I think it was something that was not vetted extremely well when it was being considered,” Mattox said.

She added though that the remapping is an enormous task. “This is a huge endeavor. Have mistakes been made? Absolutely. But when you get your head around how many pieces are moving, it’s an endeavor.”

What City Council Plans To Do Next

After the public hearing, city council held a work session the following Monday to hear a review of the process and come up with an organized strategy for how to move forward. Steve Schuster provided some insight into that strategy, which he said was discussed at the planning commission meeting on Tuesday.

He said that the planning department is taking every comment, summarizing them, putting them into categories, and reaching out to everyone who appeared at the public hearing. They are offering to meeting with all those who spoke one on one and see how the remapping affects their property.

Schuster added that it was good for every citizen to have the opportunity to speak directly to their elected officials.

“This is once in a lifetime operation and we need to get this as right as we can, and that’s not happening overnight,” Schuster said.