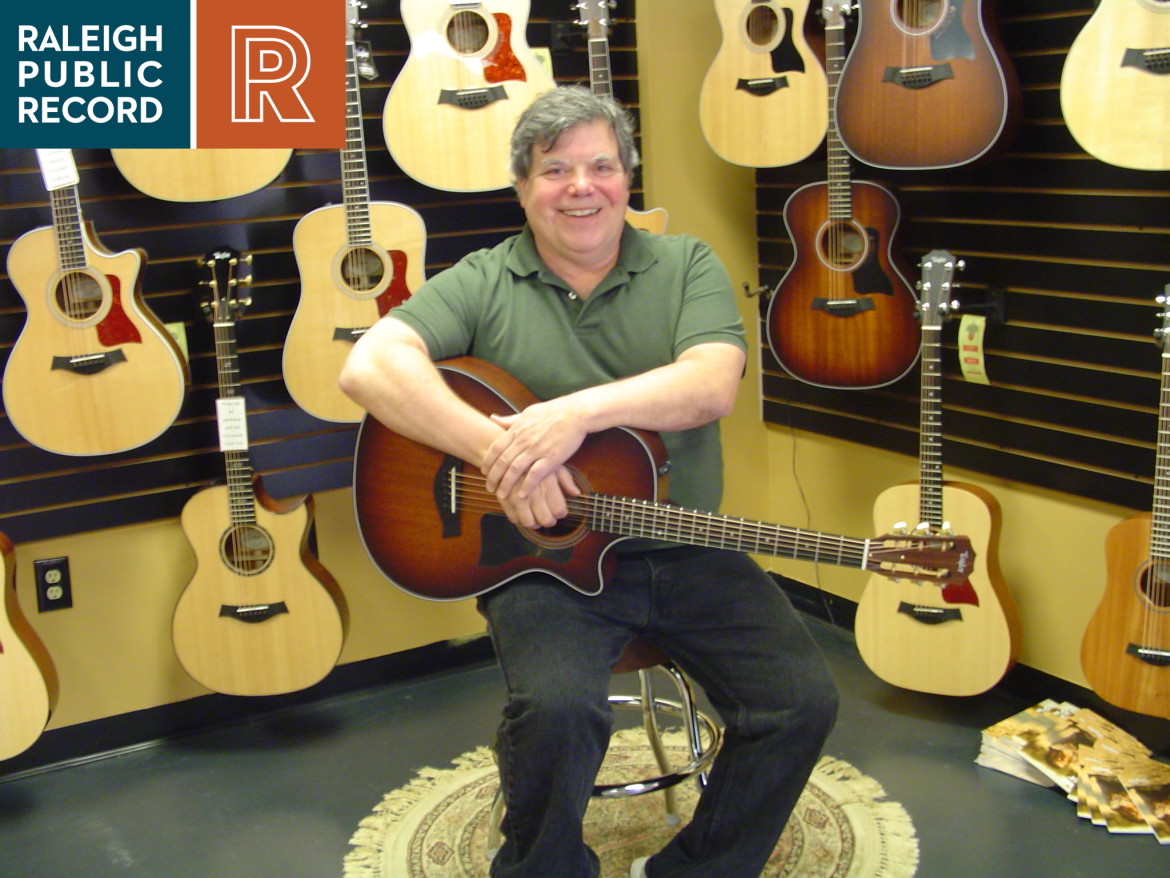 This is the first in our newest series, Strictly Business, featuring interviews with Raleigh’s many small business owners. Last week, we sat down with Harry Tueting, the long-time owner of Harry’s Guitar Shop to talk about guitars, his new shop and the important role music plays in one’s life.

Harry’s Guitar Shop has been a haven for Raleigh guitar enthusiasts for more than thirty years.

Owner Harry Tueting opened for business in downtown Raleigh, starting at one location on West Johnson Street and then moving on to Glenwood South where he repurposed a building that housed the Bausch & Lomb lens grinding factory in 1988. Last fall, the shop moved into its current location in Pylon Park off Blue Ridge Avenue. “It’s a larger space, inside and out,” Tueting said. “Parking is difficult downtown and the 16 allotted parking spaces weren’t enough.”

The 566 Pylon Drive location is spacious. Two large front rooms, a hallway with several small practice rooms leads back to an area that combines a kitchen/breakroom, storage and a repair workshop. The musical inventory is displayed on the walls of the front rooms.

The guitars (other stringed instruments-mandolins, banjos and ukuleles are displayed as well) are beautiful. The elegant figure-eight shape repeats across the walls yet the different shadings of the wood used to make the guitars reveal grain patterns and colors which gleam and glow.

But 28 years in one place has had impact.

“We were one of the first businesses to take over and revive building space in the area,” Tueting said of the Glenwood South location. “In 1988, that area was a lot “slower” and it was not easy to attract customers to it at first. But that did change fairly quickly.”

Tueting points out there were a lot a homeless folk in that area and he discovered that some of them were attracted to the music. He welcomed them into the shop and to play guitar if they could. He wasn’t surprised to find that many of them could play. “Music is a just such a part of life and people often get into it for their own well-being. Not for fame and riches. Trust me on that one,” he implored.

Tueting had his first guitar when he was eight years old.

“It was a Harmony Stella — a small ¾-size model which cost $28 dollars brand-new. And it was terrible! Hard to play, hard to tune. But when you are young, you don’t know any better.

“Now, even the low end models play better. The woodworking, the machining and even the glue is better. And the processes continue to improve. The market is fairly big and it’s more accessible,” he said.

Tueting continued to play as he grew up and eventually started to play gigs as part of an acoustic guitar duo in public. It was driving home from one of these gigs, talking about the hassles of getting gear from suppliers throughout the state with his partner, that he spoke fated words; “I think I can do it better.” His friend agreed. And now Harry’s Guitar Shop is in its third decade.

Tueting says the guitar is an “everyman’s” instrument. Opening the shop has affords Tueting the opportunity to foster a community of guitar players and feed the vibrant music scene that exists in the Raleigh area. The former home of Harry’s Guitar Shop on Glenwood

Maybe Raleigh isn’t known for music in such the way as a town like Austin, Texas is but as Tueting explains, “Austin identifies itself as a music town. There are a lot of people in Raleigh who play the guitar (or the mandoline, banjo or ukulele) and want to have fun doing it. There are those who want to play their guitar a certain way but don’t know how — taking lessons solves that.”

From day one, lessons have been offered at the shop, for ‘anything you can do on a guitar’ save for classical — which requires an enormous skill set. All the shop employees play. Tueting has on staff instructors available for lessons, knowledgeable craftsmen for repairs and pre-sale preparation.

Tueting sees a broad age range of people come into the shop. “Some coming in now are the grandchildren of customers,” he said. He notes that since the 90s there are more young women who play. “Their presence is really strong,” he said.

Customers come to the store for more than strings and straps. “The store helped to build a community within the [Raleigh] community. Guitar players are welcome here anytime and doing business is not the only reason they come. The store is not like a shoe store, offering one thing. Music is bigger than that. It is a part of you. Customers, staff — we have a kinship.”

“Music, playing music, makes people feel good and people like to share that with others,” Tueting said.

“I like the way we’re able to support that through this shop for going on 31 years,”