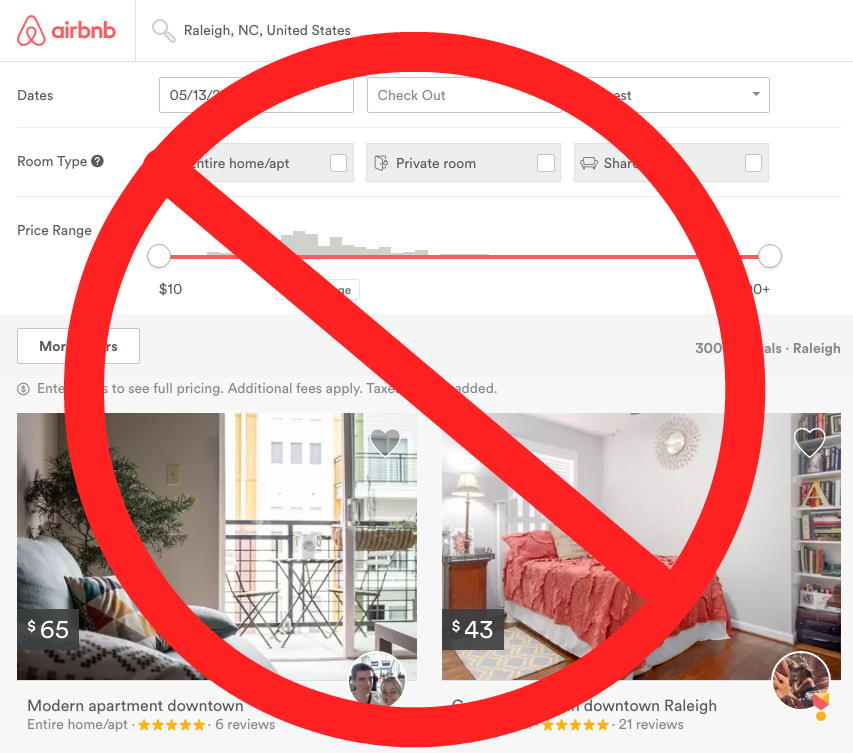 Airbnb is illegal in Raleigh, yet a search of the site turns up more than 300 listings in the city

To serve as an Airbnb host in Raleigh is to break the law.

Under existing city code, property owners may not rent out their homes or dwelling units for any period less than 30 days. While Boardinghouses and Bed & Breakfasts are currently allowed, neither are permitted to operate within most residential districts. Airbnb is illegal in Raleigh, yet a search of the site turns up more than 300 listings in the city

Following a directive from City Council last June, City staff and the Planning Commission began exploring ways to update the code to allow for short-term rentals. A series of proposed changes submitted to Council last November was sent back for further review.

Nearly five months later, the ball is back in Council’s court.

Commissioners voted Tuesday to recommend approval of a series of text changes that would legalize the practice of short-term rentals in every relevant zoning district citywide, although Councilors still need to schedule a Public Hearing and vote on whether to approve the changes.

Planning Commission Chariman Steven Schuster will present the proposed changes to Council at next week’s May 3 meeting. At that point, Council will have a number of options: scheduling a public hearing, sending it to committee or sending it back to the Planning Commission.

Anatomy of a Text Change

In order to legalize short-term rentals, a new “use” must be added to Part 10 of the City’s Unified Development Ordinance, which sets the standards for allowed property uses within the city’s various zoning districts.

Titled “short term residential lodging facility,” the new use is defined as follows:

The rental of a single-, two- or multiunit dwelling to accommodate visitors, vacationers or travelers where the rental occurs for less than 30 days at a time. A short term residential lodging facility allows no more than two bedrooms to be rented, requires a resident manager/operator and does not allow the entirety of the dwelling unit to be rented. A resident manager provides oversight for the operation of the short term rental and ensures that the applicable regulations are enforced.

Although the two-bedroom limit also includes a maximum of two adult guests and their children at any given time, the proposed text change would more specifically prohibit any more than four adults — residents or lodgers — from staying in a home at any given time.

This prohibition would prevent owners from “double dipping” and renting out their homes to multiple long-term renters in addition to short-term lodgers.

Owners would be required to get a zoning permit from the City, renewed each year, and would not be allowed to operate within 400 feet of another permitted short-term rental facility. Permits would be distributed at random to those who apply.

Short-term lodgers would not be permitted to stay beyond 30 days and would be required to wait 7 days after the initial 30 before staying at the same location again.

Owners would be required to keep a three-year log of all lodgers who stay at their home.

The permit itself can be revoked under a number of conditions. Should the owner or their lodgers be convicted of two criminal violations within a 365-day period, the permit is revoked for a year.

While these changes in City code would allow for short-term rental facilities nearly anywhere in Raleigh, Bed & Breakfasts and Boardinghouses are currently and would remain limited to two of the City’s zoning designations. These include R-10, which allows for higher density than standard residential districts, and RX, which allows for everything from bars and restaurants to retail and apartments.

There are no restrictions on the distance between Bed & Breakfasts, but code prohibits Boardinghouses from existing within 1,200 feet of each other.

In addition to adding the new use section for short term lodging, the proposed changes would clarify what constitutes a boardinghouse, removing both lodging houses and tourist homes from the “includes” section of the definition.

Before a meeting of the Planning Commission’s Text Change Committee last week, Commissioner Eric Braun said no one had appeared before them in opposition of the text changes.

At that meeting, several neighbors from the northwest Raleigh Turnberry neighborhood, located near the intersection of Creedmoor and Millbrook, made sure their voices were heard alongside those of the proposal’s numerous supporters.

“This is our first experience with this, it’s all new to us,” Boyle said.

“We met with Eric [Braun] and he said we would be the first dissenting voices.”

“We’re a quiet subdivision: 125 homes, no multifamily units, home values in the $325,000-$425,000 range… we never had a problem before: we coexist. The biggest discussion we used to have was, who’s going to mulch the planting beds in November?”

Boyle went on to explain that one of their new neighbors — Griffin Kelton, who was also present at last week’s meeting, although Boyle never referred to him directly — had begun hosting Airbnb lodgers in his home at the end of a cul-de-sac.

At first, the neighbors had no idea what was happening.

“We couldn’t figure out what was going on: we saw an increase in cars and taxis; visitors coming and going at all hours and for short durations,” Boyle said.

“To be honest, some neighbors thought drugs were being sold out of the house.”

Boyle said neighbors no longer felt safe letting their children play in the streets, and that many were unhappy about the increase in traffic and the decrease in available street parking due to the lodging house.

She also pressed staffers to do more community outreach about the potential impacts of the text change.

“The young, hip group knows all about this: I’ve been amazed at the number of people who go, ‘Whoa, you can do that; are you kidding?’ when I tell them about Airbnb,” Boyle said.

For his part, Kelton said at that same meeting that the proposed text change was “defining a new, limited sharing economy in a way that isn’t in the spirit of the sharing economy.”

“I moved here a year and a half ago from Seattle; I almost want to move back, to a city that embraces change, a place where the sharing economy exists across multiple platforms,” Kelton said.

Several of the supporters present at the committee meeting expressed disdain for the random assignment of permits for short-term lodging facilities, saying those who had more experience hosting should be given preference.

Ira Botvinick from the City Attorney’s office, who had earlier described the status quo on short-term rentals as “totally illegal,” disagreed with this assertion.

“The activity you have experience with,” Botvinick said, “is not lawful.”

“Why give that person an advantage for violating the law?”

The Turnberry neighbors were absent from this week’s Planning Commission meeting, although two of the supporters who also spoke at last week’s Text Change Committee were on hand Tuesday to tout the benefits of legalizing short-term rentals within the city.

Greg Stebben, who joked that he had the honor of being the first person cited for hosting an Airbnb unit, spent much of his time addressing Commissioners on the merits of allowing whole-house rentals, which are prohibited under the currently proposed changes.

“I have no stake in the outcome as far as whole-house goes: I rent one granny room in my house,” Stebben said.

“I think eliminating the whole house part is a real mistake for the City of Raleigh, I’m here to help the City make the right decision.”

Justin Miller, founder of the popular WedPics app, said allowing short-term rentals was key to the city maintaining a growth and technology-friendly atmosphere.

“We pride ourselves on the innovation factor,” Miller said.

“Why can’t we be the city that sets the precedent for other cities to follow?”

Although its initial suggestions had been deemed too lenient by City Council, two of the Planning Commissioners, Adam Terando and Mitch Fluhrer expressed concerns that the current text change proposal had gone too far by preventing whole-house rentals.

“I’m wondering if there’s ways we could mitigate the perceived or real impacts of a whole-house rental,” Terando said.

Fluhrer said he was struggling to see what the problem would be with allowing whole-house rentals.

“I’m concerned with all the restrictions in this,” he said.

“If you come to Raleigh, you can’t rent a condo downtown because that’s a whole dwelling, so I think this needs a little bit of work.”

Fluhrer put forth an unsuccessful motion to amend the proposal to include whole-house rentals.

The previous version of the text change submitted to Council by the Planning Commission last year would have allowed whole-house rentals to owners willing to obtain a special-use permit.

“When you have whole-house rental, you don’t have a residential use anymore: that property, essentially, is a de facto hotel, and this would be allowed in the middle of a residential district.”

Chairman Schuster said he had been hearing “from a lot of people” that it was time to move this issue forward.

“There’s been back and forth between this Commission and Council for quite some time — personally I feel the whole-house issue is one that would create greater opportunities, but I’m hesitant to pull this whole thing back and go through another round,” Schuster said.

“Especially since whole-house seemed to be one of the issues City Council gave it back to us in the first place.”

With Terando and Fluhrer dissenting, Commissioners voted to send the text change to council without any allowance for whole-house rentals, although Schuster said he would bring the issue up when presenting the changes to Council next week.