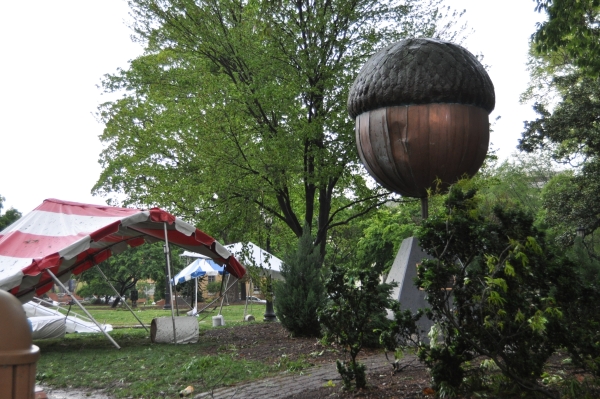 The council unanimously agreed Tuesday to pay the $3,400 bill to fix the dented monument so it can be used in this year’s First Night celebration.

The 1,250-pound acorn sits in Moore Square most of the year, where it was struck during the April 16 tornado.

Made of copper and steel, the acorn is dropped from a crane each New Year’s Eve, a celebration organized by Artsplosure.

“Artsplosure has in the past paid for [maintenance],” said Councilor Mary-Ann Baldwin. “But they don’t have the money in their budget this year.”

Baldwin also said the actual owner of Raleigh’s famous nut is unknown. The city doesn’t own the statue and she requested staff find out who does. The acorn was created by sculptor David Benson to celebrate the city’s 1992 Bicentennial and Raleigh’s nickname as “The City of Oaks.”

Councilor Bonner Gaylord asked if Artsplosure and other organizations agreed with the move to repair the damage, noting the historical significance.

Baldwin said pieces could fall off the structure posing a safety hazard, which is why it needs to be repaired before the New Year’s celebration.