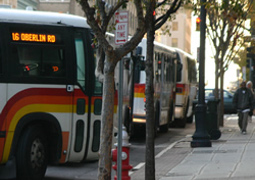 CAT buses will soon be sporting a new look

In October, Raleigh residents will cast their vote for a $75 million transportation bond to fund various road projects without the city.

The bond narrowly passed with a vote of 5 to 3. Councilors Thomas Crowder, Bonner Gaylord and John Odom voted against the proposal.

Gaylord expressed concerns that three of the city’s top five transportation projects would not be fully funded.

The breakdown of the bond money would be in a three-year stair step: design and engineering consulting, followed by right-of-way and property acquisition and then construction. Some projects would only be funded to right of way acquisition under a $75 million bond.

The construction of those projects would remain unfunded and wouldn’t be completed until the money could be found.

“If we fund the front end of something we should fund it all the way over to completion,” Gaylord said.

He argued for one of the higher bond amounts suggested at the May 29 transportation retreat, which included options of $108 and $128 million.

He said that the bond should include the rest of the money it will take to complete these projects.

Crowder added that keeping the limit to $75 million is “delaying the inevitable.”

Odom said he would not vote in favor of just a dollar amount—he needed more of a definite plan for distributing the money.

While transportation staff will have a plan for what projects will receive funding, those projects aren’t set in stone and could be changed at any time. At this point in the process, councilors only had to agree on a dollar amount.

Debated projects include improvements to the New Bern Avenue coridor and widening Tyron and Poole roads.

Mayor Nancy McFarlane noted that the bus rapid transit portion of the New Bern Avenue plan is a $40 million commitment and could be too big of a project to take on without securing state funding.

The council plans to determine which projects will be funded at a future meeting.