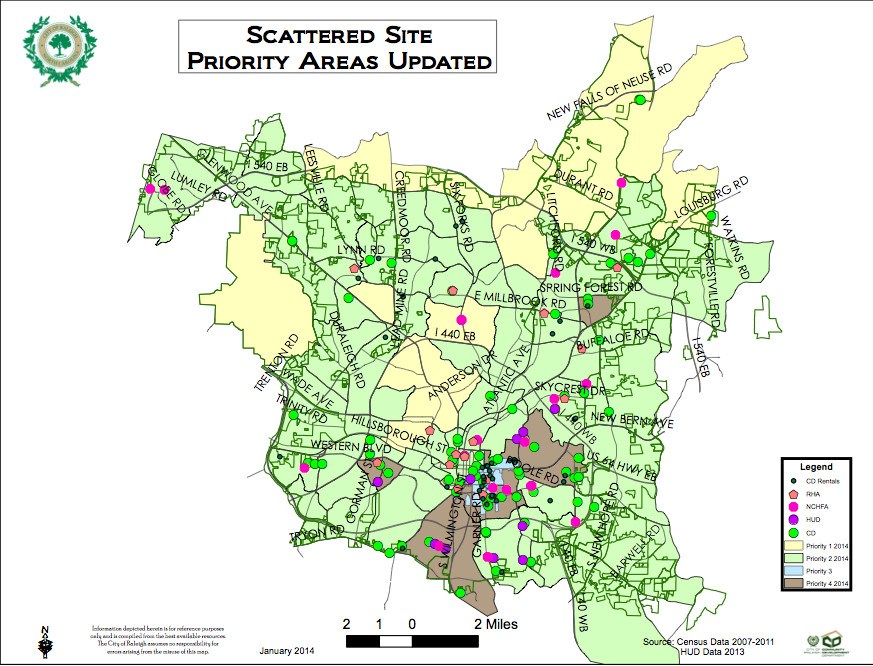 A recent version of the Scattered Site Policy map.

Revisions to the Scattered Site Policy are on hold while city staff collects more information that should better reflect Raleigh’s low-income housing picture.

Members of the Raleigh City Council’s Budget and Economic Development Committee last week asked city staff to request information from the Raleigh Housing Authority that would show where Section 8 housing is located. The current map is created using census data and data from the federal Department of Housing and Urban Development (HUD).

The Scattered Site Policy was created to ensure that affordable subsidized housing is not concentrated in areas of low-income and minority residents. The map is used when developers want to build affordable housing using city funding. A recent version of the Scattered Site Policy map.

Areas of the city are broken up into four priorities: Priority One being areas are those that lack affordable housing; Priority Four areas have heavy concentrations of low-income and minority residents.

Both Councilors Eugene Weeks and Thomas Crowder pointed out that the maps may be outdated and flawed.

Thomas Crowder said the maps lacked Section 8 housing. Section 8 housing is private rental housing that accepts vouchers from the Raleigh Housing Authority and is not included in the current map. He and Weeks agreed that this was significant data that should be included on the map.

Crowder also said that census data may not be completely accurate because people earning lower incomes may be less likely to respond to census surveys. Community Development Director Michele Grant responded that they rely on HUD data because it’s the most reliable data source.

Crowder said that he felt the map did not accurately represent certain areas, especially some in his district. There were areas marked as Priority Two that he felt should be labeled Priority Three or Four.

Grant said Priority Two means racially and economically diverse. Racially diverse means that the minority population is between 23 and 60 percent.

Crowder said an area can be considered racially diverse but still have a high minority population. Crowder said to truly understand an area, you have to “put boots on the ground and see what’s actually there.”

Crowder said in order for an area to be successful, you cannot segregate low income from high income. Businesses and jobs are more likely to be in moderate- to high-income areas.

Grocery stores and employment centers tend to locate themselves in the higher-wealth areas, but Mayor Nancy McFarlane said those areas also tend to lack public transportation.

Committee members put the issue on hold for another two weeks while staff collect the necessary data.