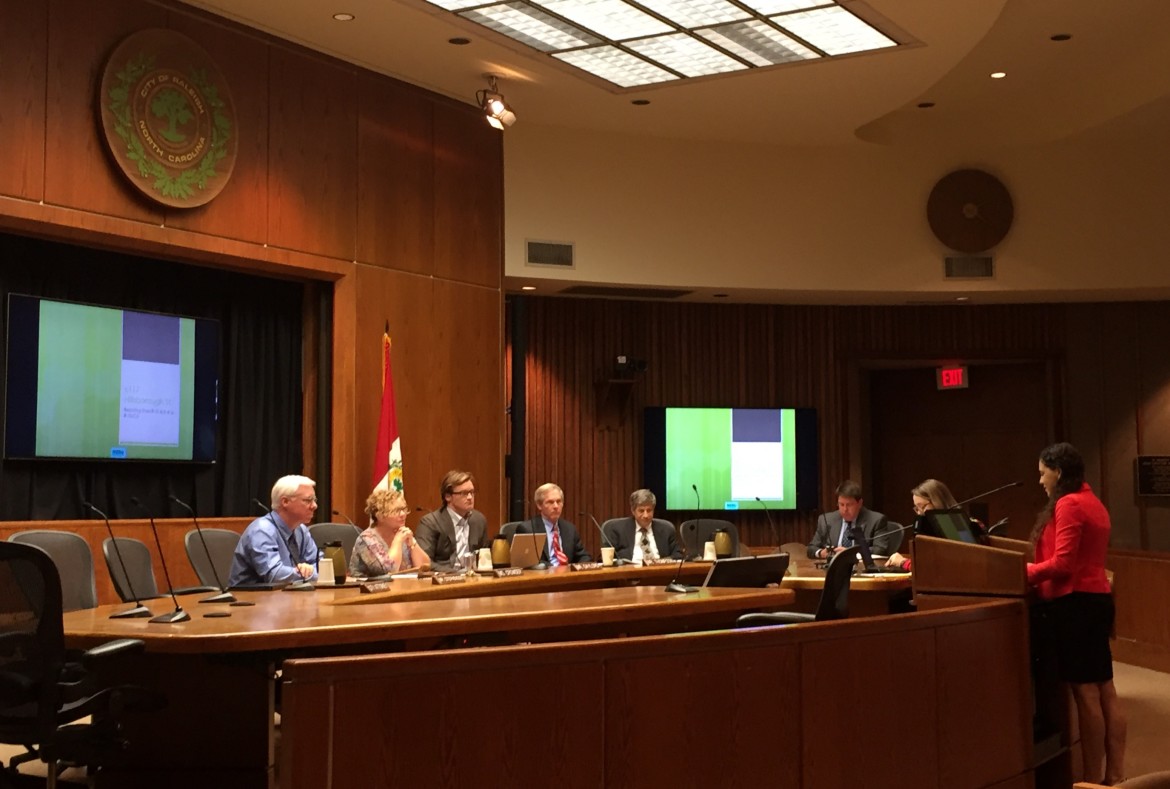 Following its second and final appearance at the Growth and Natural Resources Committee on Wednesday, rezoning case Z-34-13 was sent back to City Council with a recommendation that it not be approved.

First filed in 2013, the case would rezone a parcel of land at 6117 Hillsborough Street currently split between R-4 and R-10 classifications so that the entire property would be zoned R-10. The site in question is indicated by the blue dot

This would allow the Toma family, who has owned the property since 1982, to build a higher-density town home development on the site than allowed under present conditions. The current zoning caps out at 44 units; the change would allow for 66.

The Record initially reported on this case back in May 2015, when the developers requested a deferral to allow more time to address neighborhood concerns. The case finally made its way out of Planning Commission in March and a Public Hearing was held at the April 5 City Council meeting.

Nicole Toma, a licensed engineer whose father and grandparents own the land, was asked at that meeting to look into some of the issues raised, such as the possibility of cross-access with an adjoining property for motorists  and the possible impact stormwater runoff would have on neighbors using wells and septic systems.

At the April 27 meeting, Toma brought with her a report from the project engineer.

“He said, unfortunately, at this stage there’s not a real way to quantify the impacts the 22 additional units would have,” Toma said.

She added that the engineer had pointed out if the rezoning is denied, the additional stormwater controls the family had agreed to as a condition of the rezoning would no longer be required. The Tomas would then be free to develop a number of single family homes, which could lead to more impervious surface than the proposed townhome development. The Committee discussed at length the merits of various stormwater control measures for the project. They were unsure whether it was better to be more prepared for less common but larger storms or more common but smaller ones; either way, the current stormwater control plan cannot be changed at this stage, as it is listed as one of the rezoning conditions.

“This is a very hard case,” said Crowder, just before Thompson motioned to recommend its denial.

The motion was seconded and approved; Gaylord was the only dissenting vote.

“I feel like stormwater is the main issue, and the proposed zoning does more for us than if the property were not rezoned,” he said.

As the Public Hearing for the rezoning technically began at the April 4 Council meeting, Councilors will have to make a final decision on this long-delayed case when they convene May 3.