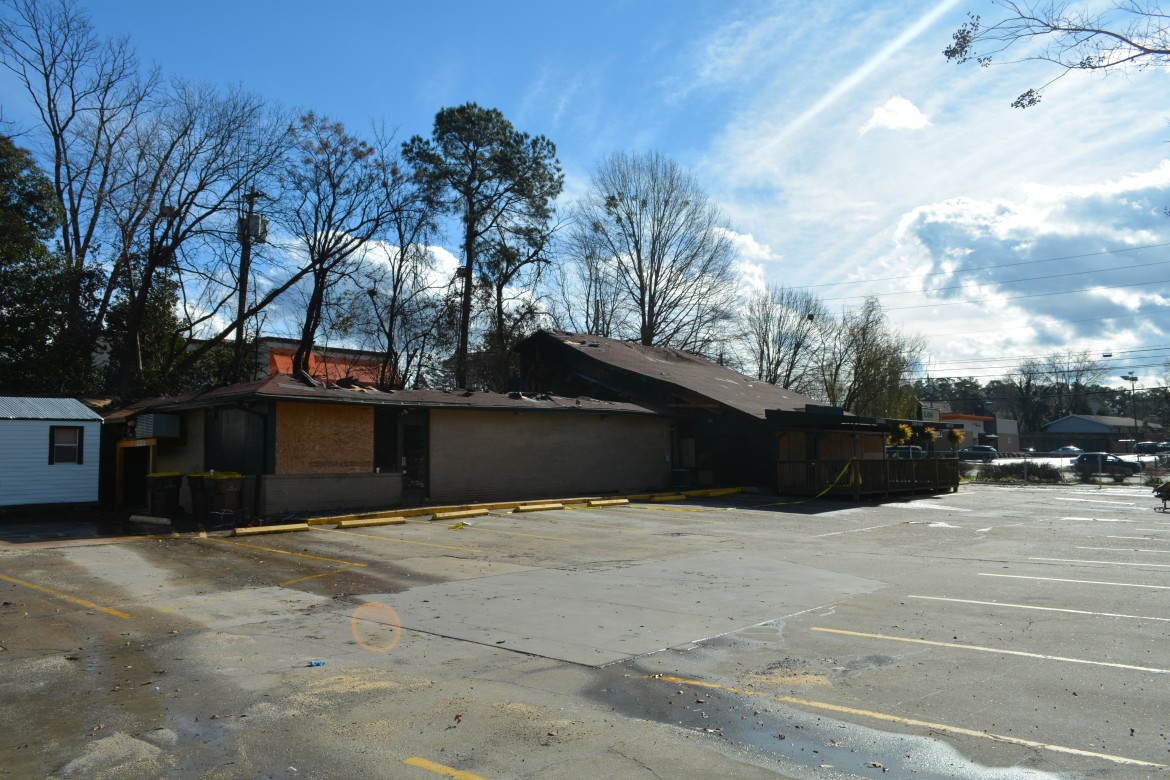 Sushi Nine was damaged by a fire last week

Today’s featured teardown shouldn’t come as much of a surprise to anyone who was following the local news back in January: Sushi Nine, damaged by fire in the first full week of 2016, received demolition permits on February 29. First built in 1985 as a Golden Corral restaurant, the former home of Sushi Nine at 3812 Western Boulevard was also the previous site of Ten Ten, a Chinese restaurant. Although we never visited any of these iterations of the place, I imagine Ten Ten was probably the best. But in the interest of full disclosure, I do have a very strong bias against sushi. What can I say? It’s gross.

Obviously there’s a lot of people that disagree, and those folks should be delighted to know that Sushi Nine announced plans on its Instagram account in January to stage a grand reopening of the restaurant.

As many of you know, the beloved Sushi Nine has been severely damaged from a fire on Friday. Even after all the heartache and headache, we will be back stronger then ever before! Thank you to all the loyal customers that stood by our side since the first day! We can’t wait to see all of you at the grand re-opening of Sushi Nine! #sushinine #sushirestaurant #sushi #raleighrestaurant #raleighnc #foodporn #sushiporn #food #sashimi #greatfood #raleighfoodpics #919eats #trifoodiess #thedailybite

The place clearly had a lot of fans and supporters: Sushi Nine’s posts on social media received lots of great feedback, and it had pretty decent Yelp ratings. Kong L., an Elite Yelp Reviewer (yes, that’s a thing, and from what I’ve heard, there are real-life perks, like free meals from restaurants, invitations to grand openings, groupies, etc.) wrote of Sushi Nine: Sushi Nine was damaged by a fire in early January

I guess I could make some crack about how sushi is such a terrible food that the only way you can sell it is by offering a never-ending buy-one-get-one special, but obviously I’m in the minority with regards to my hot take on raw fish.

The BOGO move is actually a pretty good one, especially considering its proximity to NC State. Students who might not otherwise be able to afford the relative “luxury” that is a meal at a sushi restaurant could easily split the cost of a buy-one-get-one deal. I have no idea if I’m hyphenating that right.

While browsing Sushi Nine’s above-mentioned Instagram account, I came across this short video shared by an obvious fan of the restaurant, Devon Gerenza. It was too hilarious not to include here:

Hats off to Ms. Gerenza. There’s really no way to top that, although before I close out, I should mention that Cecil Holcomb will be handling the $15,000 demolition.