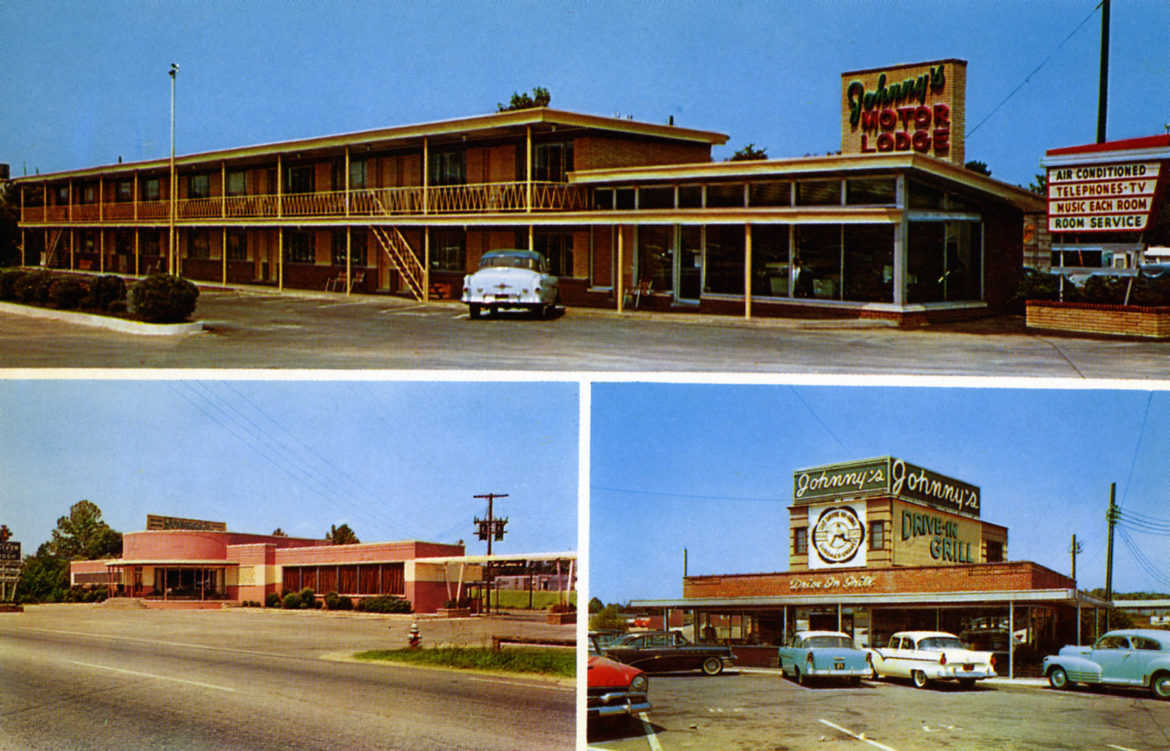 Two months after awarding the demolition contract for the Capital Inn, the City of Raleigh has granted the necessary demolition permits to Janezic Building Corp for the teardown of this 70-year-old motel. Not surprisingly, the Capital Inn did not begin its life in 1946 as a low-end residential motel suffering from severe bedbug problems.

Except for the bedbugs, this sounds like a pretty cool place

In fact, what was most recently known as The Capital Inn appears to have started off as two separate lodging facilities: the Popajohn Tourist Court & Johnny’s Motor Lodge. We don’t have a ton of information on the Popajohn place, except to say it has no relation to the popular pizza chain & was actually accompanied by a restaurant known as “Pop’s Chicken.”

We think the Tourist Court came before the Motor Lodge, but we can’t say for certain when the motor lodge was built. Wake County’s Property Records have three separate buildings listed on this parcel: the 1946 motel, described as “Capital Inn,” a motel described as “Johnny’s Motor Lodge” built in 1965 and a restaurant described as “Blues Cafe” built in 1946. Goodnight Raleigh has an excellent article on the history of the whole complex under the ownership of John “Johnny” Griffin: it once contained Johnny’s Drive-In Grill, Johnny’s Supper Club & the aforementioned Motor Lodge. However, the article notes that the grill opened in 1948 and that the motor lodge came ten years later.

The 1948 edition of the Hill’s Raleigh City Directory (a comprehensive listing of all businesses in the city) does not mention Johnny’s, but it does list the Tourist Court and Pop’s Chicken at the same addresses, 1625 and 1623 Louisburg Road (the street layout was very different back then) that later editions of the directory ascribe to Johnny’s Motor Lodge etc.

In an entry in the 1959 version Raleigh City Directory cited in the Goodnight Raleigh piece we linked above, the complex was described as follows: A circa 1950s photo of Johnny’s Supper Club, Drive In Grill & Motor Lodge

While the postcards made the place look a little nicer than it does in the above photo, we still think it looked much nicer then than it did in the present year. Plus, the description makes it sound like a pretty decent place to stay. Much better than the way the author of that GNR article summarized the current state of affairs in a follow-up comment: “exceedingly tawdry and seedy.” Ouch.

In addition to the “art moderne” style of Johnny’s Supper Club, Drive In Grill & Motor Lodge when it was first built, the complex was the recipient of an interesting architectural upgrade in the 1960s, per Goodnight Raleigh:

“Griffin expanded the motel and grill in the early 1960s and updated the restaurant with one of Raleigh’s first modernist ‘googie’ style canopies.”

If you’re wondering what a “googie style canopy” is and don’t feel like clicking through: think Char-Grill. But you should really click the link, it’s another cool site from the folks behind Goodnight Raleigh.

We’re not sure when the Capital Inn lost its canopies, but it happened long before the city began its plans to acquire and demolish the property.

Speaking of: although we’ve written about it a few times, here’s a quick recap of what’s coming next for the one-time home of Johnny’s Motor Lodge. A rendering of North Boulevard Par

For years, the City of Raleigh has worked to acquire a set of parcels along a flood-prone zone along Capital Boulevard that in addition to the Capital Inn included Raleigh’s first Dunkin’ Donuts and the infamous Foxy Lady Gentlemen’s Club, which was attached to another low-end motel, the Milner Inn.

The strip club/motel was torn down in early 2015, but the Dunkin’ Donuts, which actually closed before the Foxy Lady, still stands, but not for much longer. Janezic is set to demolish it as part of the contract it was awarded in September for the Capital Inn.

The City will eventually turn all this newly vacant space into the North Boulevard Park, which will serve not only as a green space of its own but as a connector between existing portions of the city’s greenway trail system. The park will be connected via a paved walkway that will extend from Crabtree Boulevard to Atlantic Avenue.

Is there some kind of deeper meaning behind the fact that a complex which once catered exclusively to motorists will now be turned into a pedestrian destination? We’re not sure, but one thing’s for certain: it’s living proof of the the City’s focus on green space, walkability and long-term planning, and we couldn’t be more excited about it. The Raleigh Police Department often conducts drills inside abandoned or soon-to-be-demolished buildings. The demolition of the Capital Inn also includes the teardown of the old Zanziba Club, which once housed Johnny’s Grill and possibly Pop’s Chicken.

Bonus: for a 1950s-era photograph of the interior of Johnny’s Supper Club, check out this post from BlueRidgeVintage.

Yes, if you’re wondering, we had plenty of terribly unfunny election/demolition puns lined up for today’s lede but figured if you’re reading this column on November 8, 2016, you’re trying to take a break from all the political stuff. Instead I’ll indulge myself  by sharing this rare variant of the “Me: I promise I won’t get all political/Three drinks later” meme, because as divisive as this election has been, everyone loves Charlie.