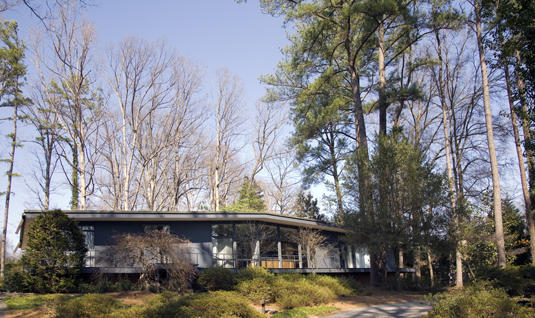 Major/Minor Work Wednesday is a semiregular feature that takes a look at recently filed applications with the Raleigh Historic Development Commission.

A two-story addition could be coming soon to the single story Philip Rothstein House, one of Raleigh’s officially designated historic homes. Built in 1959, the home isn’t exactly “historic” in the traditional sense — it was originally built as part of the Modern Movement! — but the house is important enough to have its own Wikipedia page.

In 2004, The City of Raleigh passed an ordinance declaring the home a historic landmark. The following year, it was added to the National Register of Historic Places.

If you want to read a really in-depth, well-written summary of the house from a historical/architectural standpoint, we highly recommend checking out National Register application, which is available here. Start on page five.

To summarize: the Rothstein House is a one-story, single-family home designed by renowned architect G. Milton Small in the “International Style.”

Per Wikipedia: The most common characteristics of International Style buildings are said to be: i. rectilinear forms; ii. light, taut plane surfaces that have been completely stripped of applied ornamentation and decoration; iii. open interior spaces; iv. a visually weightless quality engendered by the use of cantilever construction. Glass and steel, in combination with usually less visible reinforced concrete, are the characteristic materials of the construction

Many of these characteristics apply to the Rothstein House, most notably the way it appears to “float” above the land at 912 Williamson Drive, near the intersection of Wade and Glenwood. An historic view of the rear deck at the Rothstein House

This minor illusion is accomplished thanks to “two-inch by ten-inch joists, supported by short sixteen-inch square piers and projected beyond the foundation to cantilever the deck, mak[ing] the house in its front and side elevations appear to float above the ground, while its rear, north-facing facade meets the slope at grade level.”

The above was written by former Rothstein House owner Marita Gilliam, or someone on her behalf, in the NRHP application she filed in November 2014. Sure, that section was a bit technical, but I really enjoyed the prose throughout the rest of the application. This is from the very first page:

“Towering pines and oaks protect the home from the sun’s blaze in summer, while the sun passively warms the home in winter. Bountiful gardens in the rear of the property provide another visual surprise, while the grounds visible from the street feature azaleas, dogwoods, a live oak, and a thread-leaf Japanese maple.”

Would that I could write the Development Beat in a similar style.

But enough about the past. We promised tales of the future in our intro, so let’s get to it.

In August of this year, an application was filed with the Raleigh Historic Development Commission by local design firm in situ studio on behalf of current owners Nathan and Anne Singerman. (An evidentiary hearing on the application had been scheduled for October, but was deferred.)

In the application, the Singermans spell out their plans for a two-story rear addition that’s greater in square footage than the original home. It will be built on the rear of the property in order to leave the “primary view” of the house from the street as-is. A rendering of the planned addition

The addition will be connected to the main house by a glass hallway and contain a basement that, according to the application “is almost completely submerged into the ground.” Is Mr. Singerman planning to build himself a literal man cave?

In addition to maintaining primary view of the home, the application makes sure to note that “no existing openings will be disrupted” and explains that the addition will give the appearance of being one story from the street thanks to a roof that “slopes north to create a second story in the rear.”

Of course, you can’t have addition without subtraction: the Singermans also plan to remove a concrete pad, make changes to the rear yard and remove seven trees.

A retaining wall will also be added to the back of the property, behind which there will be “a future accessory structure for future pool storage and equipment.” A future pool, eh? I think I smell another COA application in the Singermans near future.

One interesting side note: the Singermans were actually featured in episode 15 of the sixth season of the HGTV show “Love it Or List It.” The page for the episode has a gallery of before-and-after photos. Considering what a good job they did with the interior, and the fact they’re working with the well-regarded in situ studios, we’re very interested to see how this project turns out. The “after” photo of the living room. You won’t believe the before photo!