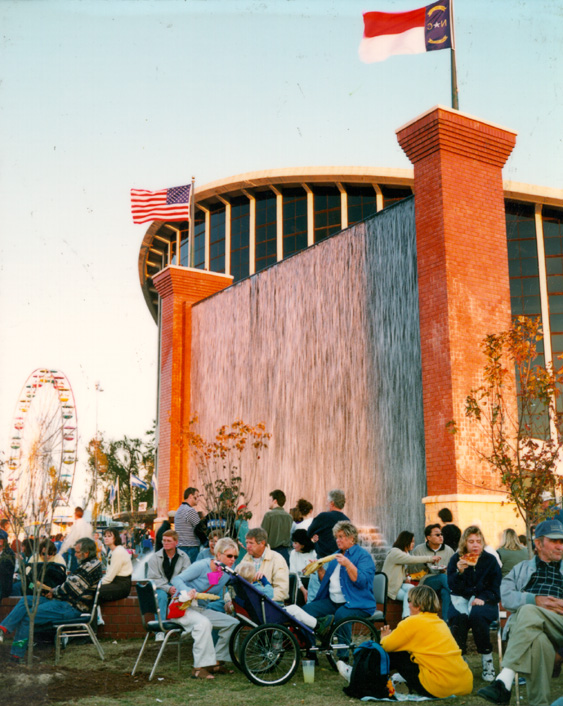 The new waterfall at the NC State Fair was dedicated on October 14, 1999 as the Helen Kirk Graham Waterfall. All money thrown into the waterfall is donated to the eastern chapter of the N.C. Alzheimer's Association.

CORRECTION APPENDED: The first reference to Alice Graham Underhill incorrectly had her last name as Underwood.

As the leaves turn from green to a mosaic of reds and browns, the State Fair comes to town.

For two weeks in west Raleigh, the State Fairgrounds transforms into acres of lights, fried food, rides, music, horse shows, dairy competitions — a land of tradition that reaches back to farms and farming culture that celebrated the harvest.

In the crisp, cool air, at the top of the Ferris wheel, romances are born and renewed.

And at the State Fairgrounds, there is a physical representation of a long-lasting romance, set to the backdrop of agriculture in the Land of the Pine.

The waterfall, just outside Dorton Arena, is dedicated to Helen Kirk Graham, the wife of Jim Graham, the longest serving Commissioner of Agriculture in North Carolina history.

The new waterfall at the NC State Fair was dedicated on October 14, 1999 as the Helen Kirk Graham Waterfall. All money thrown into the waterfall is donated to the eastern chapter of the N.C. Alzheimer's Association.

The waterfall is the second structure of its type to stand at the State Fairgrounds, and it’s where Jim Graham first met his future wife.

Before he was “The Sodfather,” Jim Graham was a good ole boy from western Rowan County who grew up on a cattle farm in Cleveland, and saw agriculture as his future.

Let me take a moment of personal privilege: My grandfather, John Robert McNeely, grew up with Jim Graham. They were friends growing up all through school. The McNeelys and the Grahams attended Third Creek Presbyterian Church in Cleveland together.

When my great-grandfather, Samuel McNeely, died of a heart attack when my grandfather was about 16, the first folks to visit the house were the Grahams.

When Jim Graham retired as Commissioner of Agriculture in 2000, he kept an office in Patterson Hall in the College of Agriculture and Life Sciences, where I would visit with him from time to time when I attended N.C. State.

Now, on to the story.

One day, Jim Graham was unloading 200-pound bags of fertilizer on the farm. On the bag read the name, “William Graham, Commissioner of Agriculture.” (No relation to Jim Graham’s line of the family, he writes in his autobiography.)

A hired hand joked to Jim, saying, “If I were you I’d be Commissioner of Agriculture when I grew up and you won’t have to lift these heavy bags anymore.”

That turned into a prophetic statement for Jim Graham’s life, to say the least.

Graham grew up, graduated from Cleveland High School, and attended N.C. State College, as the university was known then, to the disappointment of his mother, who wanted him to attend nearby Davidson College, study religion and become a member of the clergy.

Graham studied agriculture education, on a track to become an ag teacher, head a laboratory farm, and then, become Commissioner of Agriculture.

But before all that, he met Helen Kirk.

Graham writes in his autobiography that he first saw a picture of Helen Kirk, the daughter of a Baptist preacher from Mocksville, in Davie County, not too far from where Graham himself grew up, in the storefront of a photo studio on Salisbury Street.

Graham was entranced and had to find who this young lady was. As he wrote, Graham inquired, found out her name, and continued to investigate further.

That was when Graham was a senior at State College in 1941.

He finally met Helen Kirk at the old waterfall on the State Fairgrounds.

Jim Graham met Helen Ida Kirk at this waterfall on the grounds of the NC State Fair in 1941. The waterfall was torn down in 1967.

Picture this for a minute: A young, tall, handsome, slightly awkward country boy, with slicked-back hair, shifting back and forth nervously, standing in front of the waterfall at the State Fair, eagerly awaiting the young lady.

In the background the sounds of the fair envelope the scene: Hawkers promoting their games, organ music coming from rides and attractions, the blinking lights, all of it blending together on a crisp autumn evening.

The young man looks around, and back at his watch, and looks up again … and there she is: An attractive young lady, in a dress, demure and just as expectant.

The pair met face-to-face, a bit awkward at first, introducing themselves to each other. He then takes her hand and leads her out into the midway.

Now, we don’t know if it happened that way, but that’s the Hollywood version, right?

As it was, Helen Kirk was to be a home economics teacher in Rowan County, where Graham planned to work, he wrote in his biography. He decided then to pursue Helen.

Alice Graham Underhill said the waterfall story gets more embellished every time it was told in the family, but here’s the basic storyline: Helen had already graduated college and was teaching in Rowan County. She was bringing a group of students to state fair, and Jim and Helen arranged to meet at the old waterfall, which was near the gate on Blue Ridge Road.

They met, had a good time at the fair and rode back to Rowan County together, Underhill said.

The Grahams were married 55 years. In that time, they had two daughters, and Jim did, indeed, become Commissioner of Agriculture — serving 36 years in the post.

In their later years, Helen developed Alzheimer’s disease. Graham wrote in his autobiography:

“Helen and I made a promise to each other during the prime of our youth that should one become disabled the other would strive to the limit of his or her ability to care for the disadvantaged one in our home. I am proud to say that I have kept my promise to Helen and I shall continue to honor that commitment to the end of my days.”

Helen died in 1999. Not long after her death, the new waterfall tower at the State Fairgrounds was dedicated as the Helen Kirk Graham Waterfall. All the money that’s thrown into the waterfall goes to the Eastern Chapter of the North Carolina Alzheimer Association.

Jim Graham retired as Agriculture Commissioner in 2000. He would keep an office at N.C. State, but he also declined in health, and died in 2003.

The waterfall is a landmark at the fairgrounds — a place where lost children wait for their parents, where groups of friends meet up, and where folks look for the face of that special someone in the crowds, waiting hopefully, full of nervous excitement, that they just might meet their future.

Meet them there, at the waterfall.