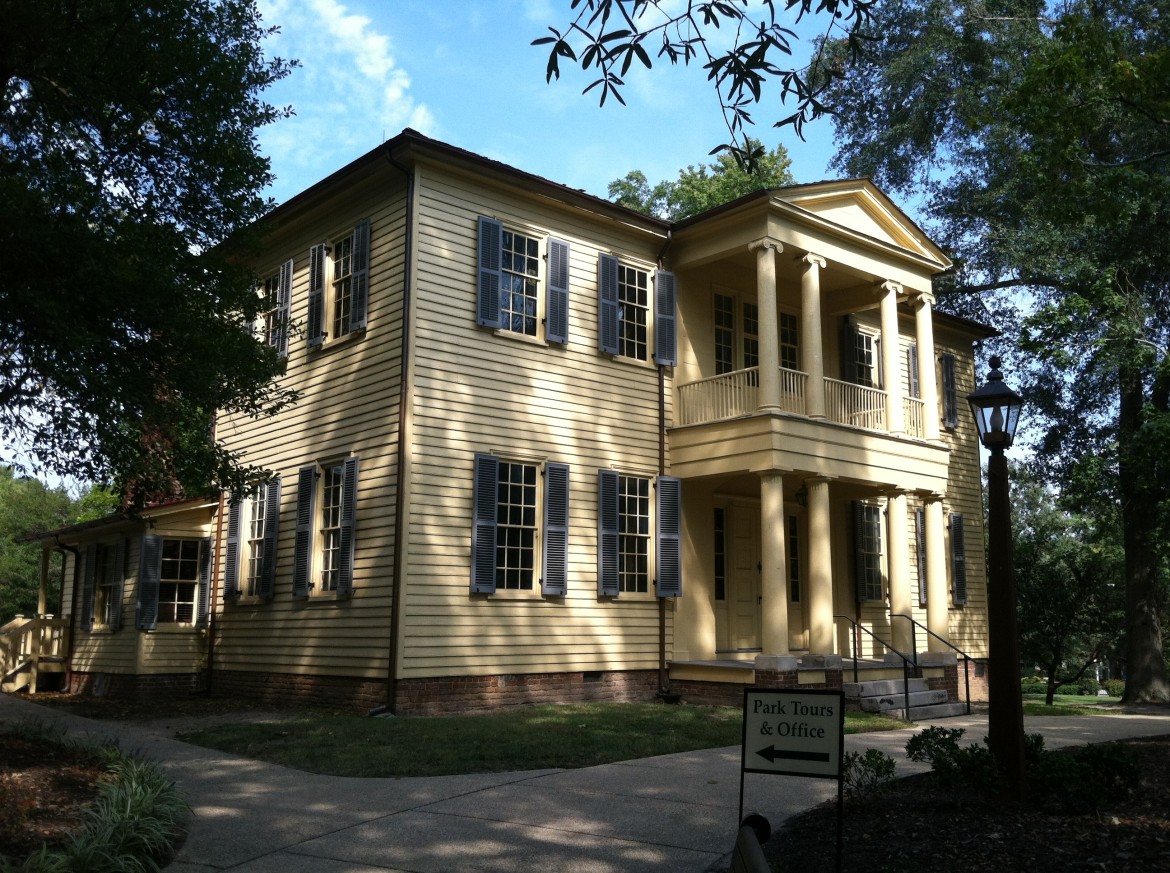 Take Wake Forest Road north, out of downtown, past the Krispy Kreme and Person Street Pharmacy, go around the bend and you’ll pass the Mordecai community.

Seems like an odd name to see, especially since the streets in Raleigh are named for cities and counties in the Land of the Pine or legislators from the early days of the state.

But Mordecai is Raleigh’s oldest neighborhood, and the Oak City’s founding neighborhood. At its center is the Mordecai house and park, which includes the cabin where President Andrew Johnson was born.

The Moredcai house, itself, is the oldest house in Raleigh still on its original foundation.

But walk around the grounds of the park and listen — you’ll hear two names floating around.

So who’s right? Both of them, sort of.

Moses Mordecai was a young lawyer from Warrenton, N.C. He came to Raleigh to practice law and, in the process, met and fell in love with Peggy Lane, granddaughter of Joel Lane, famous for giving land to found the city of Raleigh.

When he moved to Raleigh, Moses changed the pronunciation of his last name, from “Mor-duh-kai” to “Mor-duh-key.” Why?

Here’s the story that was told to her:

“This is unconfirmed: Mordecai is a standard Jewish-German name. Jacob Mordecai’s father emigrated here from Bonn, Germany. When Moses moved to Raleigh, at some point, he started pronouncing his name as ‘Mor-duh-key.’ What is generally believed, but not confirmed by any primary source, is that Moses was maybe trying to make his name sound a little less Jewish.”

The plantation was named for the Mordecai family, which pronounced their last name “Mor-duh-key.” So is, technically, the neighborhood that sprang up from the plantation.

The house and land were passed down through the family until one of the daughters, Patty, inherited them, and started selling off the plantation land and investing the money into creating and developing Raleigh’s first neighborhoods — Mordecai, Oakwood, Brooklyn, Glenwood.

From there, the Mordecai neighborhood sprung up around the house, in which descendants continued to live in until 1965. Five generations of the same family, spanning almost 200 years, lived in the house that Joel Lane first built.

The city of Raleigh, seeing the historical relevance of the house, bought the house from the descendants of the Mordecai family and turned it into a park. In the 1970s, the city moved several other structures to the site on Wake Forest Road, including President Andrew Johnson’s birthplace, to create the Mordecai Historic Park.

It’s a fixture in the neighborhood, which is enjoying a renaissance due to its location: proximate to downtown, yet just enough outside to have a cozier, more small-town feel to it.

City officials are planning to open a new park center in a house adjacent to the Mordecai Park. The old slave manager’s house and other buildings now currently used for storage and offices can be freed up, restored and used to tell the full story of the Mordecai plantation.

You could argue that both are correct. Descendants of the family still use the formerpronunciation to this day. But when you see the name spelled out on signage along Wake Forest Road, you think and hear in your head “Mor-duh-kai.”