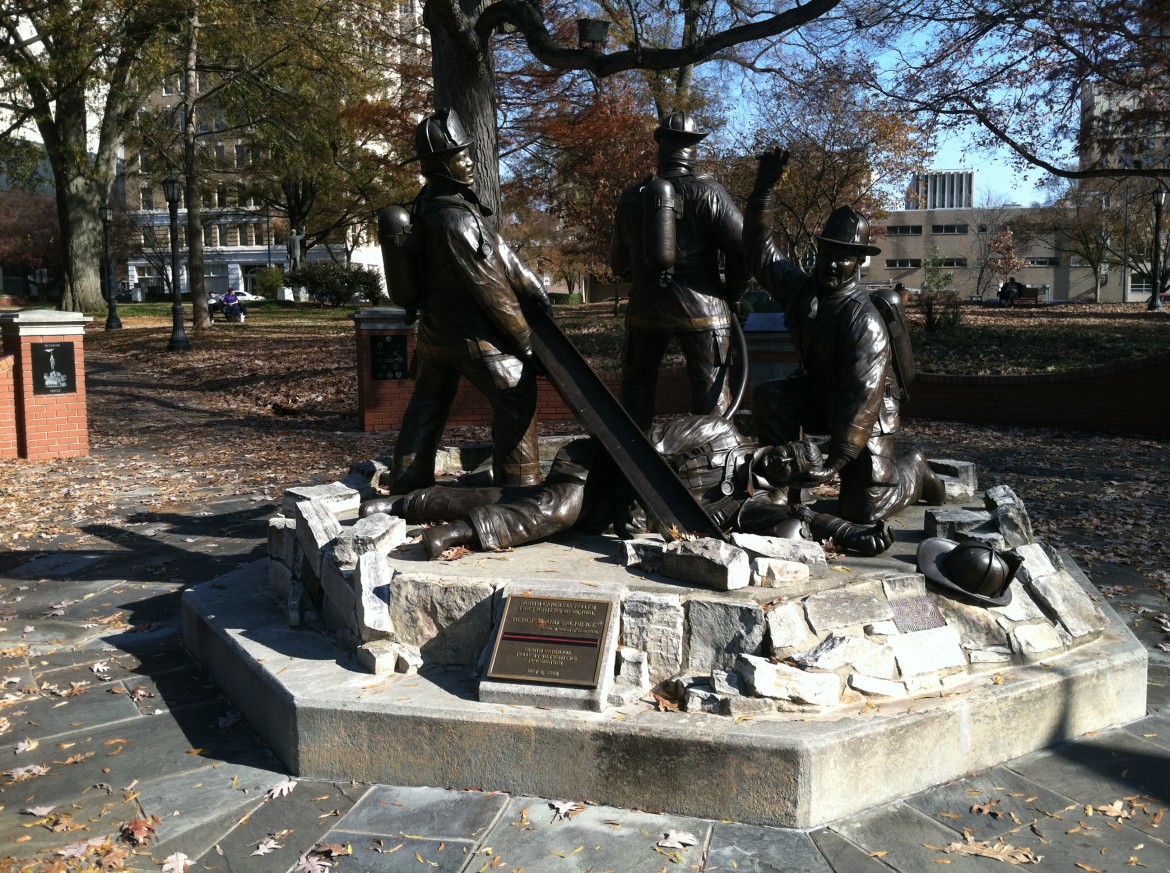 The North Carolina Fallen Firefighters Foundation Memorial stands in the middle of Nash Square, a tribune to firefighters who lost their lives in the line of duty.

In the original 1792 plans for Raleigh, William Christmas drew up plans for five public squares, laid out in the shape of a domino, planned green spaces set apart among the rest of the young capital city.

While downtown Raleigh has kept an eye to preserving historic buildings, the squares that once dominated the city landscape have slowly diminished.

The original plan for the city of Raleigh, designed by William Christmas, 1792.

There’s Union Square, where the State Capitol stands, with monuments to governors, presidents and other state dignitaries scattering the green lawn. The first state capitol burned down in 1831. A new one, the one that stands today, was completed in 1840 and once housed all three branches of state government for decades.

There’s Nash Square, across McDowell Street from the News & Observer office. A statue of the N&O’s publisher, Josephus Daniels, stands in Nash Square, facing his beloved newspaper. There are also memorials for fallen firefighters and police officers.

The North Carolina Fallen Firefighters Foundation Memorial stands in the middle of Nash Square, a tribune to firefighters who lost their lives in the line of duty.

The 1792 plan was similar to the original plans for Savannah, Ga. and Philadelphia, Penn., in that it incorporated green space within the city grid.

But today, the only open squares left are Nash and Moore. Two others — Burke and Caswell Squares — were conscripted for official use in the 19th century.

A public square put to official use
The governor’s mansion that stands today on Burke Square is the third official residence of the chief executive of the Land of the Pine.

In colonial times, the capital of North Carolina was wherever the governor lived. The first capital was Edenton, it then moved to New Bern, where Tryon Palace was built.

Tryon Palace housed the executive and his family, and held sessions of the General Assembly until 1794.

The governor lived in that house from 1797 until 1816, when another, more prominent brick house with grand white columns was built at the south end of Fayetteville Street, where Raleigh Memorial Auditorium now stands.

That house hosted the General Assembly, along with the governor and his family, when the State Capitol burned in 1831.

Gov. Zebulon Vance briefly lived in the house during the Civil War, from 1862 to 1865. When Gen. William T. Sherman arrived in North Carolina during his fiery campaign through the South, he used the house for his headquarters.

After that, the state decided the house wasn’t fit for the governor anymore. Who wanted to live in the house where that Yankee devil slept, right? Or so went the thinking at the time.

For 20 years, the governor didn’t have a home. In 1883, Gov. Thomas Jordan Jarvis prompted the General Assembly to appropriate funds for a proper governor’s house, to be built at Burke Square.

The state hired architect Samuel Sloane of Philadelphia to design the mansion, which is done in a Queen Anne style of Victorian architecture. Using inmate labor, the house took six years to build, opening for the governor in 1891.

Since then, the governor and family have lived in the big house at Burke Square.

History of the governor’s mansion.

From 1841 to 1845, Morehead set out to modernize North Carolina and establish the public services that we still enjoy today – namely, public roads and schools.

The old School for the Deaf and Blind as it stands today. It’s now houses offices for the Department of Agriculture.

Morehead also was an advocate for people with disabilities.

William D. Cooke, the headmaster of the Virginia School for the Deaf and Dumb, wrote to Morehead in 1843 with the idea that North Carolina should establish a similar school.

Morehead was enthusiastic about the idea and lobbied the state Presbyterian Synod and the General Assembly for support. In 1845, the General Assembly appropriated money for a school “to provide for the education of the poor and destitute deaf-mutes and blind persons in this state.”

The school initially opened in a house two blocks from the Capitol, but four years later, the General Assembly gave money for a new building at Caswell Square.

The school held classes at Caswell Square until 1913, when it moved to its current location on Ashe Avenue, across from Pullen Park, and it was renamed the Gov. Morehead School.

The Department of Agriculture now uses the old dormitory building at the corner of Dawson and Jones streets as offices. And the N.C. Community College system has its offices in the Caswell Building, at the opposite corner, on Jones and McDowell streets.

Preserving The Squares
As the time passed, the squares evolved and, in some cases, shrank.

Nash Square used to be almost five acres. Now it’s four — its edges lopped off to accommodate on-the-street parking and heavy traffic around it.

The squares are more than gathering places in downtown Raleigh. They are places where life happens. You can’t walk around downtown Raleigh in summertime without running into a wedding party taking photos in Union, Moore or Nash Square.

In each square stand the towering oak trees that give the city its identity. But the parks are old, its benches worn, its walkways cracked and crumbling.

In Moore Square, there is more activity. The space hosts festivals, and the homeless who gather every morning after meal times at the Salvation Army and service times at the Long View Center.

The City of Raleigh has plans to renovate Moore Square, because it has become a gathering place for events as part of downtown’s renaissance. As it stands now, the park can’t accommodate the activity properly.

The Moore Square Master Plan proposes to redesign the park with open areas for recreation, a performance area, and other amenities. Most importantly, the plan takes into account, preserves the mighty oak trees in the square. The plan is yet unfunded.

The beauty of a city is not just its skyline, but how it’s developed and maintained. Green spaces have long been known to enhance the aesthetic beauty and quality of life of a city.

That’s why parks advocates heralded the state lease of Dix Hill, just southwest of downtown, to the city of Raleigh, as a victory.