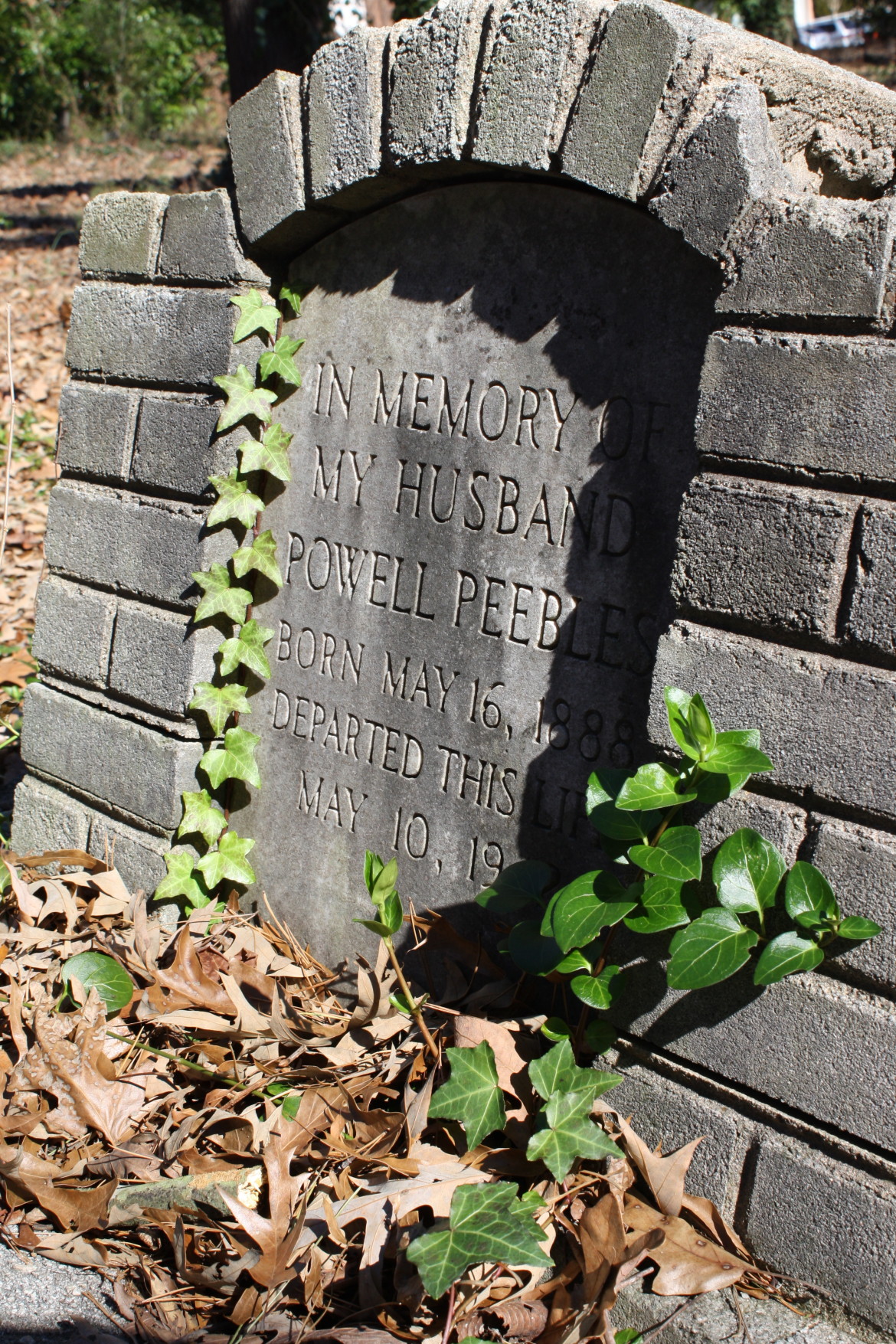 Many of Oberlin Village's residents were masons. Their work can be seen on some of monuments in the cemetery.

Correction: This story has been updated to reflect the correct spelling of Irma McClaurin’s name.

A tall wooden headstone stands upright in Oberlin Cemetery. The person that it represents remains a mystery. No words or names remain inscribed. Protected by a magnolia tree, it is the only remaining wooden marker in the 150-year-old burial ground for this historically black community.

Joseph Holt, a former Oberlin Village resident, excitedly proclaims that he remembers seeing markers like these along the back of the cemetery when he was a child growing up nearby.

One day, he said, developers erected a chain link fence and the markers were gone. All that remains is a parking lot that belongs to the Trademark Properties building.

“They were back there. But they disappeared,” Holt said.

Researcher Ruth Little, of Longleaf Historical Resources, makes some notes on a yellow legal pad. She’s been researching the history of the cemetery and prepared the application for historic landmark designation from the City of Raleigh.

Longtime Raleigh residents, Leonidas “Sonny” Haywood and George Morgan are also walking through the cemetery on this chilly February day. Haywood and Morgan both have family connections to the cemetery. Their ancestors, early Oberlin Village residents, are buried there.

Holt says he’s distantly related to some folks in the cemetery, but his main connection is as a resident who lived near its entrance when it was still an active burial place. A dental office now sits on the property where Holt once lived.

Only 145 markers exist in the cemetery. In some cases, depressions such as these are the only hint of a burial plot. Photo by Ariella Monti.

Now where Oberlin Court stands, Holt remembers a small section of graves that always seemed better kept than the rest of the cemetery.

Oberlin Cemetery sits in the triangle between Oberlin Road, Wade Avenue and Daniels Street and its only access is from the parking lot of the InterAct offices on Oberlin Road.

It is a peaceful oasis in the middle of bustling semi-urban development, complete with businesses, thoroughfares and multi-family housing.

Much of the cemetery’s history remains a mystery and is subject to educated speculation because there is no official plat map on record.

Only 145 — formal and informal — monuments remain, but Little believes that there are about 600 people buried on the property. In some cases, the only marker is a depression in the earth.

At the front of the cemetery, near the InterAct parking lot, stand two rows of 12 field stones. Little believes that they are the headstones and footstones of slaves that were buried there. She doesn’t know for sure though. It’s possible that they could represent village residents that couldn’t afford formal markers.

Contrary to local belief, the cemetery isn’t owned by the city or any neighboring church. The land was deeded to John Manuel, Coffee Williams, Mingo G. Croom, Seth Nowell and Nelson Turner by Nicholas Pettiford to be used as a cemetery. The cemetery continues to be listed under these names with no instructions as to how ownership is to be passed down or transferred.

A half-acre annex was added in the early 20th century and was used until 2007.

By the 1870s there were about 150 black property-owning families living and working in Oberlin Village. Many were tradesmen working as blacksmiths, masons, shoemakers and carpenters. Some were farmers or farm workers. Others were educators.

Ruth Little speculates that these field stones are the head and foot stones of former slaves. Photo by Ariella Monti.

Among other occupations, women in the community tended to work as laundresses, servants, nurses and teachers.

Morgan was born in Oberlin Village and can trace his family back to some of the area’s earliest residents. He grew up on the other side of Raleigh in Chavis and Rochester Heights.

“I can go on and on,” said Morgan as he listed the immediate and extended family members that can be found in the cemetery. Morgan, Curtis, Hall, Snelling and Poole are just some of the family names to which Morgan is connected.

“You’re kin to everybody, aren’t you?” Holt joked as they walked through the cemetery.

Haywood points to a row of cars across the street from Zoes Kitchen where the group has gathered. He said his grandfather Claude and Claude’s brother, Alonzo were blacksmiths.

“The blacksmith shop was there where those cars are parked,” he said.

Like Morgan, he was born in Oberlin Village and can trace his family there, but he grew up on the east side of Raleigh. Many of his family members are buried in unmarked graves.

The landmark designation doesn’t mean the site is free from development, but Friends of Oberlin Cemetery members, Donna Bailey and Sabrina Goode, said they hope that the recognition will bring awareness of the cemetery’s existence and historical significance.

Goode, an Oberlin native, can trace her roots back to the neighborhood. She said her fourth generation grandfather Wilson Morgan was born into slavery and went on to become a North Carolina State Senator.

“Over the years the cemetery has sort of fallen into neglect because the city did not own it,” Goode said.

Prior to his death, Goode’s father organized the area churches to cleanup the cemetery. Since his passing, the cemetery has been cleaned up by volunteers organized by the group.

Friends of Oberlin Cemetery put up a set of maintenance guidelines for groups who want to help clean up the cemetery. Photo by Ariella Monti.

The problem is, Goode said, in old graveyards such as these, things as simple as a stick or bottle could have been purposefully left to mark a grave. Former Shaw University president Irma McClaurin created a set of guidelines for volunteers to follow that would hopefully eliminate the loss of important remnants.

The group has had two cleanups so far, each with about 30 people in attendance.

Goode said one of their goals is to conduct thermal scanning so that the group can create an accurate plot map.

“By thermal scanning, we’ll be able to tell if there are actual slaves buried there,” she said. “That would clear up the speculation one way or the other.”

Bailey said some Eagle Scouts will start constructing a kiosk and a walkway this month.

“Just getting the designation is going to open up a lot of doors,” Bailey said. 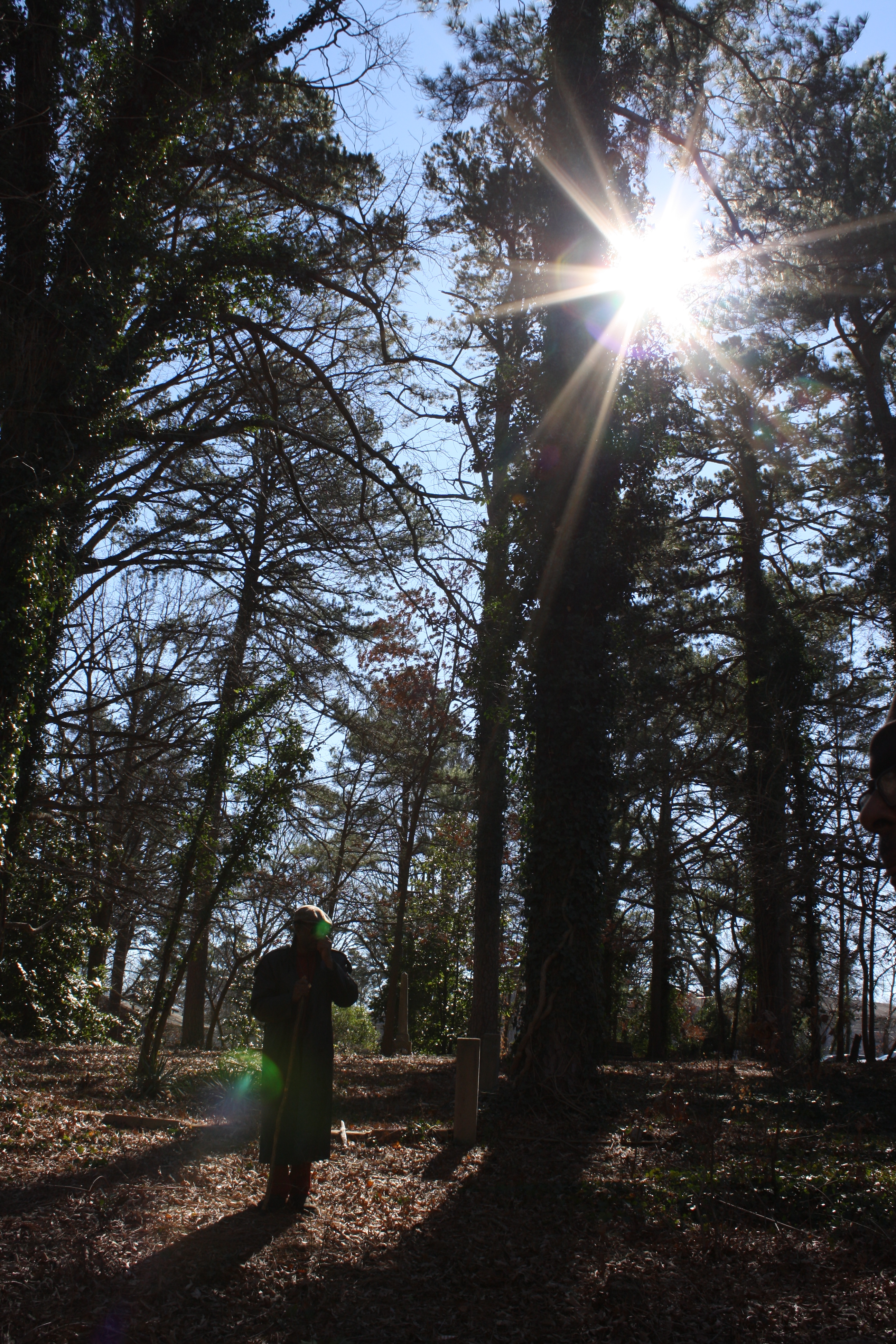 Sonny Haywood can trace his ancestry back to one of Oberlin Village's first settlers. 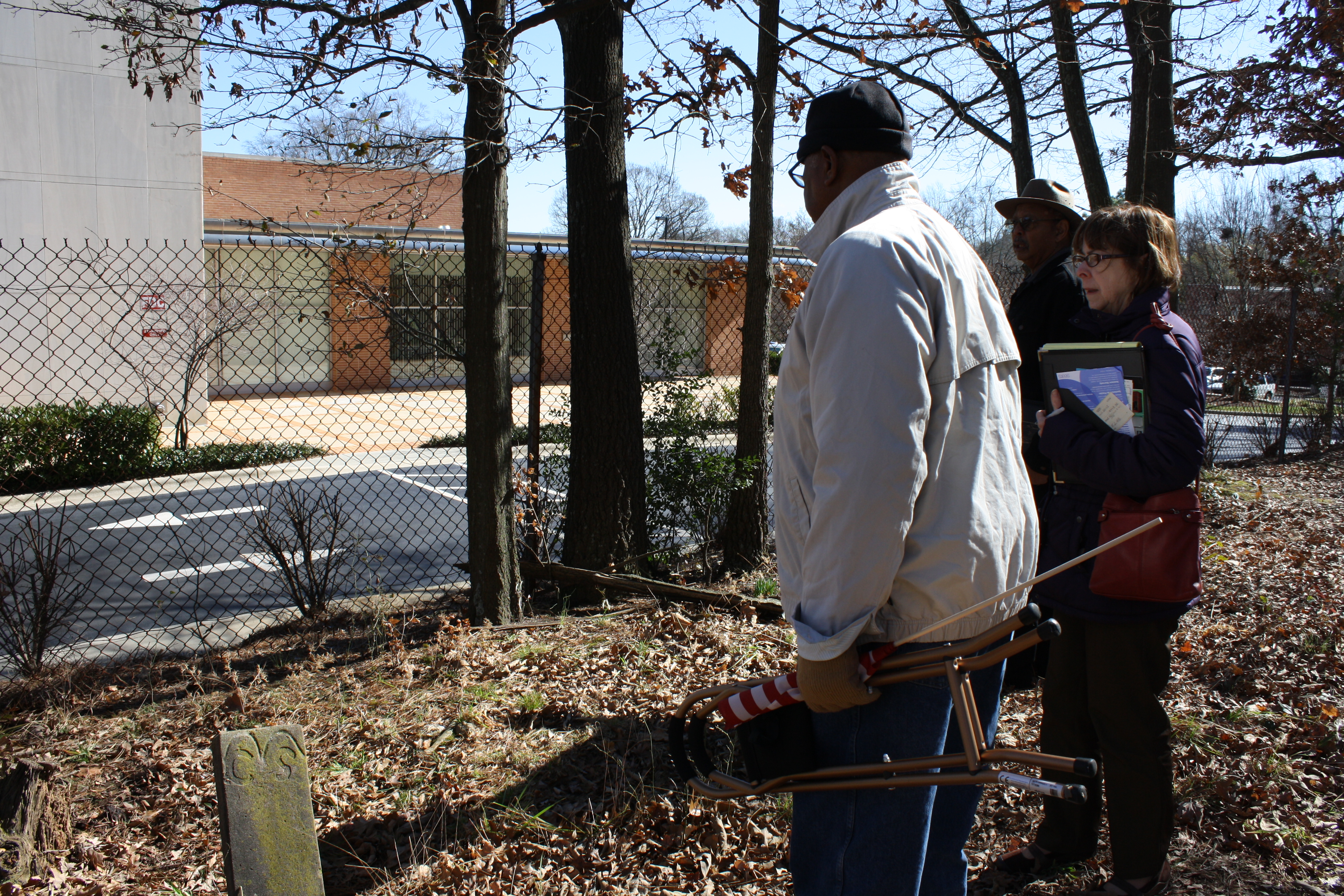 Holt explains that beyond this fence where a parking lot now stands, he remembers wooden grave markers. 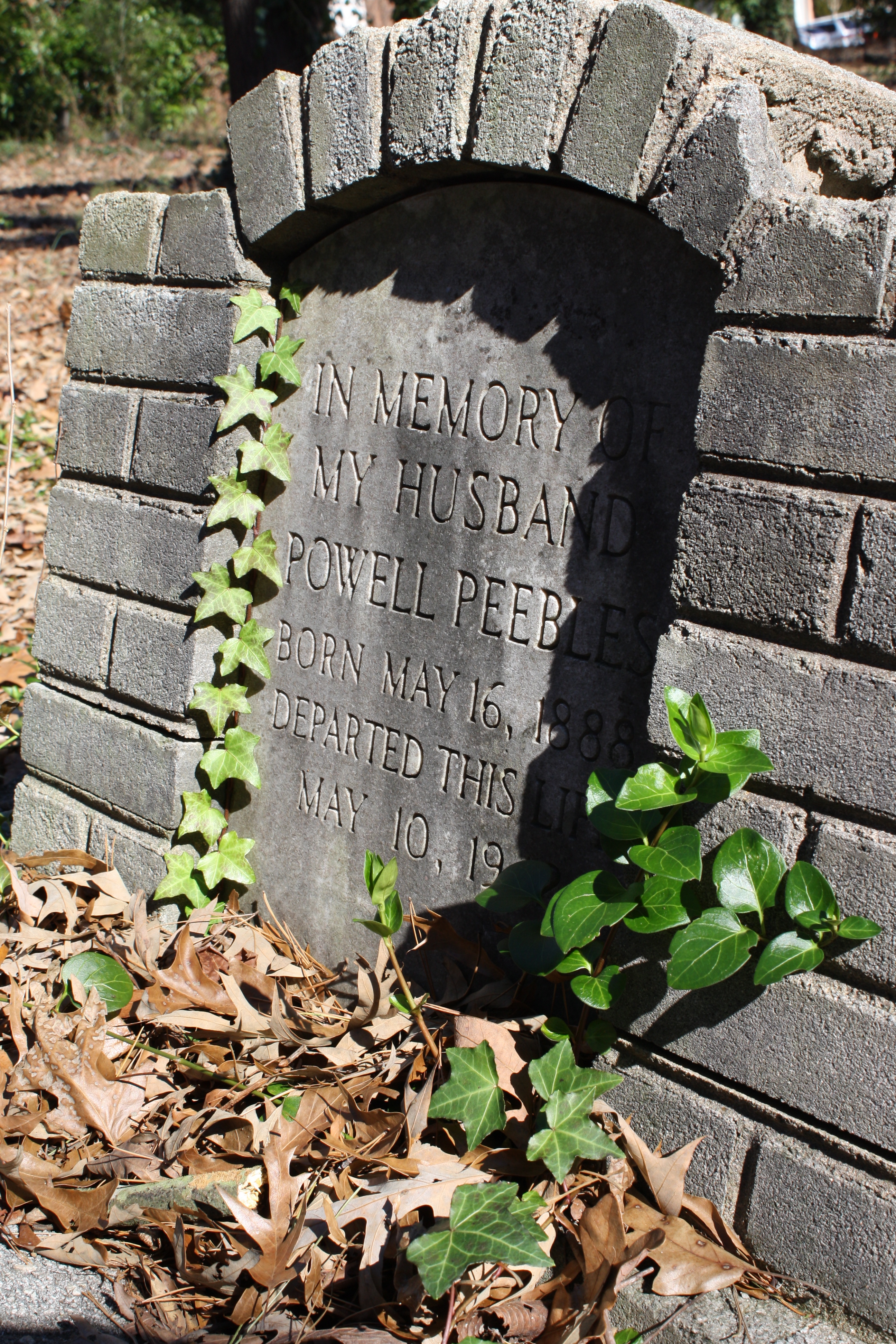 Many of Oberlin Village's residents were masons. Their work can be seen on some of monuments in the cemetery.