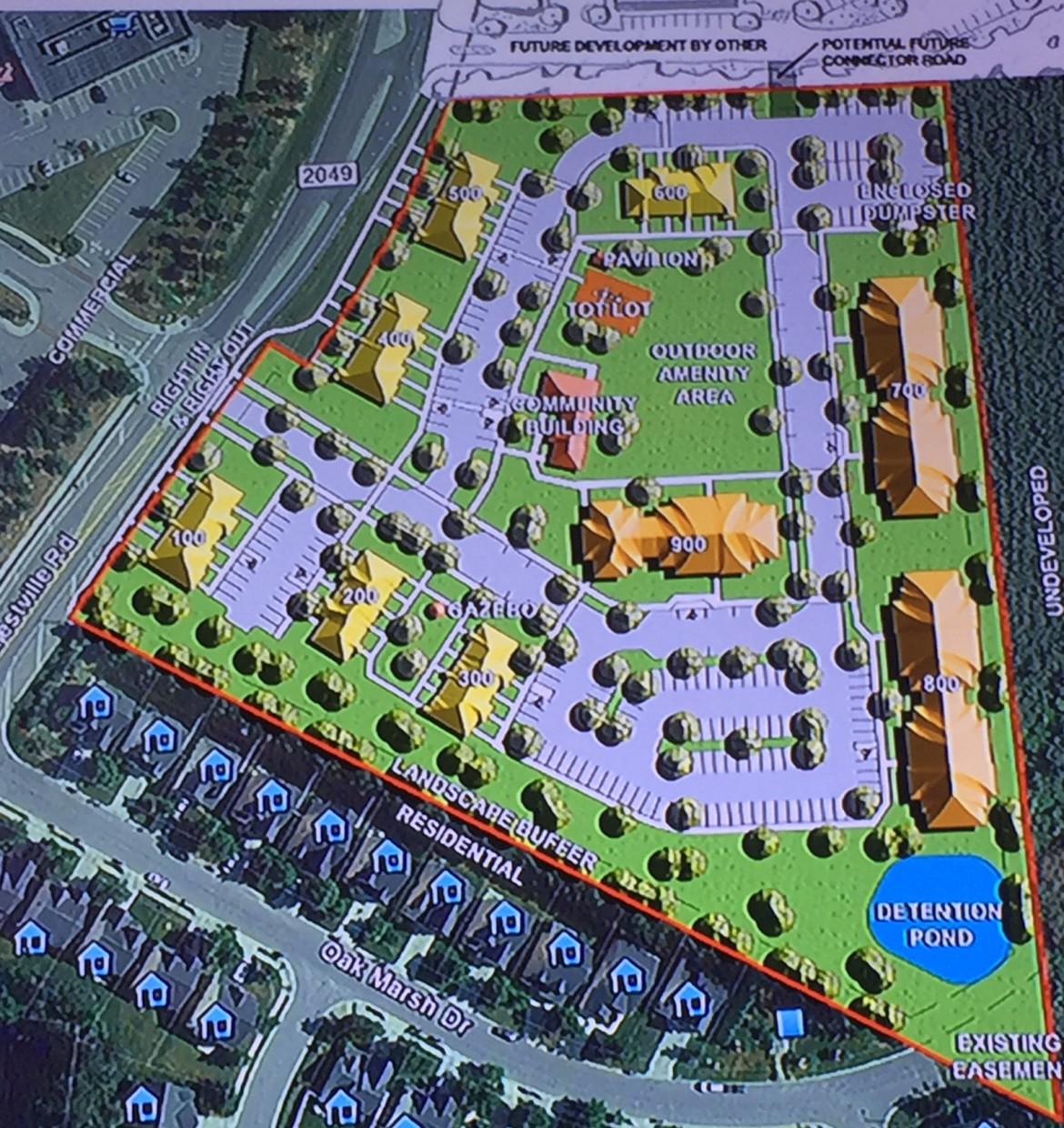 The possible site of a new affordable housing development

On January 5, Rea Ventures Group met with several neighbors to the property’s north to discuss their concerns, which mostly revolved around property maintenance and impacts on their home values.

Neighbors to the south only learned about the project in mid-April, a week before a Public Hearing for the rezoning had been scheduled for City Council’s April 19 meeting.

Rezoning case Z-3-16 would rezone the 9.41 acre parcel in question from R-4, which allows for low-density, single-family residential development of up to four units per acre, to RX-3-CU, which allows for up to 10 units per acre. Although RVG is only planning 100 units for Abbington Village, the rezoning would increase the total number of units allowed on the property from 37 to 287.

A letter sent by RVG to the Braefield Homeowners Association was said to have been neither received nor returned to the developer.

At the April 19 Public Hearing, a number of residents of the Braefield subdivision raised concerns over issues such as pedestrian access, the proximity of a detention pond to their neighborhood community area and a potential impact on their home values.

Councilors voted to send the case to the Growth and Natural Resources Committee to allow RVG more time to meet with the Braefield neighbors.

On April 26, RVG hosted an informal meeting for the newly concerned neighbors. Councilor David Cox was in attendance.

In an interview with The Record, Cox said he had passed around a tablet and asked people to write down their name, address and whether they supported the project.

The day after the informal meeting, the development team and the neighbors faced off again in front of the Growth and Natural Resources Committee. Although it was not required, Councilor Kay Crowder, who chairs the Committee, granted each side eight minutes to speak.

In a presentation on behalf of RVG, Michael Birch of the Morningstar Law Group emphasized the difference between affordable housing and workforce housing, which is what Abbington Village would be. Plans for Abbington Gardens in Winston-Salem

Birch pointed out that the units — a one-bedroom runs $683/month — are geared toward working professionals such as police officers who would theoretically have enough home buying power to purchase property in the surrounding residential neighborhoods.

The development would have an on-site property manager and about 70 percent of the available units would be one and two-bedroom.

As neighbors had expressed concern over the proposed three-story height of the buildings, Birch said the developer would be willing to add a condition that limited the buildings nearest Oak Marsh Drive to two stories.

Donna DeMatteo, president of the Braefield HOA, said while the neighborhood appreciated the developer coming out to speak with them, they ultimately felt the development of Abbington Village would cause “irreparable harm” to the Braefield subdivision.

DeMatteo said their concern wasn’t that the development would be a workforce or affordable housing project; rather, they were feeling overwhelmed by all the multistory, multifamily developments cropping up around their residential neighborhood.

There were a number of other issues, DeMatteo said, including increased traffic, lowered property values,  and the potential for exacerbating existing stormwater problems. Neighbors also expressed concerns about the potential for school overcrowding.

Dematteo said while it used to take her seven minutes to drive from her home to I-540, it now takes 18, and she feared adding a new 100-unit residential development to the area would only make things worse.

“A question I asked twice at last night’s meeting was, what’s the benefit for Braefield? Twice I asked and it did not get answered, that’s a little upsetting,” DeMatteo said.

Councilor Gaylord, who sits on the Committee alongside Crowder and Councilors Russ Stephenson and Dickie Thompson, said he wasn’t sure what DeMatteo had meant by this.

“What were the positive impacts of you moving into your subdivision; how did that benefit the one across the street?” he asked.

DeMatteo said it was problematic so many neighbors had been unaware of the project, and as far as a positive impact, she said the developer could help them to grow in a better way.

“Is it something specific?” Gaylord asked.

“No,” DeMatteo said. “I can’t give you something specific.”

The Future of Abbington Village

Stephenson said he would have trouble supporting the project because it went against what had been recommended in the City’s future land use map.

“It seems like the burden is on the applicant here to see if there’s a way we can mitigate the impact on neighbors,” he said.

RVG’s application to the federal government for tax credits — the company is requesting no money from the City of Raleigh — is due on May 13, Birch said. Although the Committee expressed interest in holding the item for further discussion, the May 13 deadline meant that Council would need to vote on the case at its May 3 meeting.

Gaylord motioned to recommend approval of the case; the motion failed. Thompson then motioned successfully to send the case to Council with no recommendation.

Councilor Cox, who is not on the Committee but was in attendance Wednesday, told The Record he tried to remove the affordable/workforce housing aspect from the project when considering its merits.

“What if it wasn’t affordable housing?” Cox said.

“What if this was a luxury housing complex? Would it be appropriate?”

Cox said he had some concerns relating to proximity, transitions, height and density and that he would have trouble supporting the project should the neighbors not find the developer’s latest efforts appropriate.

As a Public Hearing for the case was opened at the April 19 meeting, Council will likely be making a final vote on the project next week.

Update: It was suggested in the comments section that readers interested in more detail about some of the specifics should check out the staff report. This was a great point, so we uploaded a full copy of the report given to Committee members yesterday. Here’s the link.