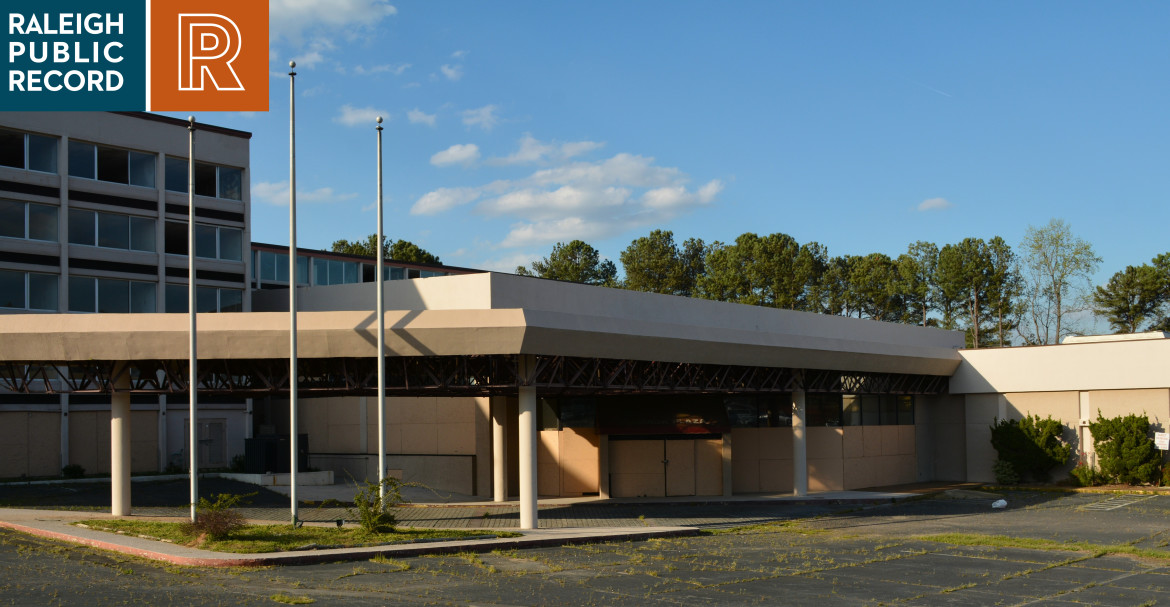 Thanks to the tireless efforts of Atlantic CAC co-chair Charity VanHorn, we’re able today to bring you the latest on Capital Boulevard’s long-vacant Capital Plaza Hotel. Ms. VanHorn reached out last week to let me know that Peter Reichard from Tryon Ventures, which is working with the property’s owner to redevelop the hotel, had been scheduled to speak at their March CAC meeting.

I was a regular attendee of those meetings last year — they’re in my neighborhood, there’s usually a good speaker booked and I generally enjoy myself. If you’re reading this and you live in Raleigh,  find out where and when your local CAC meets and start going.

Although Reichard had spoken with the Brentwood Neighborhood Association in November of last year, and we wrote a piece based on minutes from that meeting, this was our first time getting to meet him in person and ask questions.

The most interesting new thing I learned: the hotel as it stands is completely gutted; there’s nothing inside. In my mind’s eye I’d always pictured an extremely shabby, dilapidated interior full of garbage and empty rooms. Although Reichard alluded to trespassers on the property, it’s much less dramatic to think of people taking shelter inside an empty concrete shell than inside a rundown, abandoned hotel. This photo was taken in November, before the windows were boarded up.

The other new factor Reichard introduced at last week’s Atlantic CAC was the possibility of funding the redevelopment via an EB-5 Investor Visa, which allows investors from a foreign country to invest in an American project and in return have their names moved to the top of the Green Card list.

If this sounds distasteful, well, there’s been more than a few articles published highlighting the downsides of the program.

One of the CAC attendees last week in fact asked Reichard directly whether there wasn’t “any money in America” to fund the project.

Reichard said they had previously been working on an EB-5 deal with a Chinese investor that fell through, and that his partners were currently in China seeking another deal. If that doesn’t work out, he said, they will likely look for American investors.

A rendering of the refurbished hotel

One problem with attracting foreign capital for a project in Raleigh, Reichard said, is that the region isn’t well-known internationally the way cities such as Chicago, Los Angeles, New York  or Miami are.

Residents also called into question the kind of clientele the hotel would be catering to, citing several nearby motels that are often wretched hives of scum and villainy. Although Reichard had stated earlier that the hotel would be profitable at $100/night with a 49 percent occupancy rate, he said they would be charging more.

“We have no intention of charging $100 a night,” Reichard said.

“Don’t misunderstand me: that’s how we can make this work, that’s how low it can be, we have no intention of charging that.”

He emphasized that the owner, who lives in Northern Virginia and operates a Double Tree in Fayetteville, along with Tryon Ventures and a private equity firm they’re working with, are all looking out for their $20 million investment.

“It’s a beautiful structure to use,” he said.

“We want to protect that.”

The former lobby area for the Capital Plaza Hotel

He also noted that the hotel’s reputation would depend on guest safety and comfort, and that once opened, they would not allow it to fall into disrepair.

The hotel would operate under the Raddison flag, likely under its red, or midrange brand. It would cater, Reichard said, to people visiting for events held downtown who didn’t want to pay $200/night, or families in town for sporting events.

At the request of the City, the windows were recently removed and boarded up, and the graffiti was painted over. Residents asked about the shipping containers currently sitting in the parking lot, noting that they had observed some strange comings and goings. Reichard was unaware of their presence or purpose, and said he would look into it.

It’s not like shipping containers end up somewhere by accident, especially a fenced-in parking lot, but VanHorn said she saw some random guy with a book bag walking into it the other day. Weird.

The other structure on the lot, a 12-unit motel-type building, would be turned into housing for either student or international employees. There’s a live-work-play joke in there somewhere. This building was once covered in graffiti, and will eventually house hospitality students working at the hotel

Reichard said they are also looking to building another outbuilding, which could host weddings and other events, saying there was a shortage of such venues in the area.

This would be located in a large, empty parking lot currently sitting behind the building.

Although the initial plans for the hotel, which are being drawn up by Olive Architecture, called for 197 rooms, Reichard said last week that they had scaled this back. It will also include a pool, a spa and a restaurant that will offer both on-site catering and a sit-down restaurant that would be open to the public. The northern front of the property

Reichard said they are looking to make the hotel accessible via Highwoods Boulevard, which sits just south of the hotel, instead of forcing people go up to Brentwood and make a U-turn. This would require acquiring some of the property back there, and turning it into a driveway.

At the November meeting, Reichard had mentioned they were also looking at the small auto dealership that adjoins the property, as they want to create a lush landscape and improve the property’s image, with the hope it will make people say “Wow this is so new and different!” without it being ostentatious or over-the-top. No plans are currently in place to purchase the dealership’s property, however.

Last week, he also touched on the City’s planned improvements for Capital Boulevard, saying that they would like if the landscaping improvement area be extended to include the right of way in front of the hotel.

“What else can I tell you?” Reichard asked at last week’s CAC meeting.

“We’re moving slower than we’d hoped to be, but we’re still very excited. I think it’s a huge opportunity for the City of Raleigh.”

On a personal level, I’m just excited that something might (finally) be happening at this space. I’ve lived off Capital Boulevard for coming up on six years now, and that place has been deserted ever since. I even wrote about it in my very first Development Beat column!

I went out to take some pictures yesterday; the property doesn’t look too much different than it did back in November, but I got a few different shots and put them in this gallery.  These were all taken from outside the fence; I requested but did not receive permission to shoot inside the perimeter. 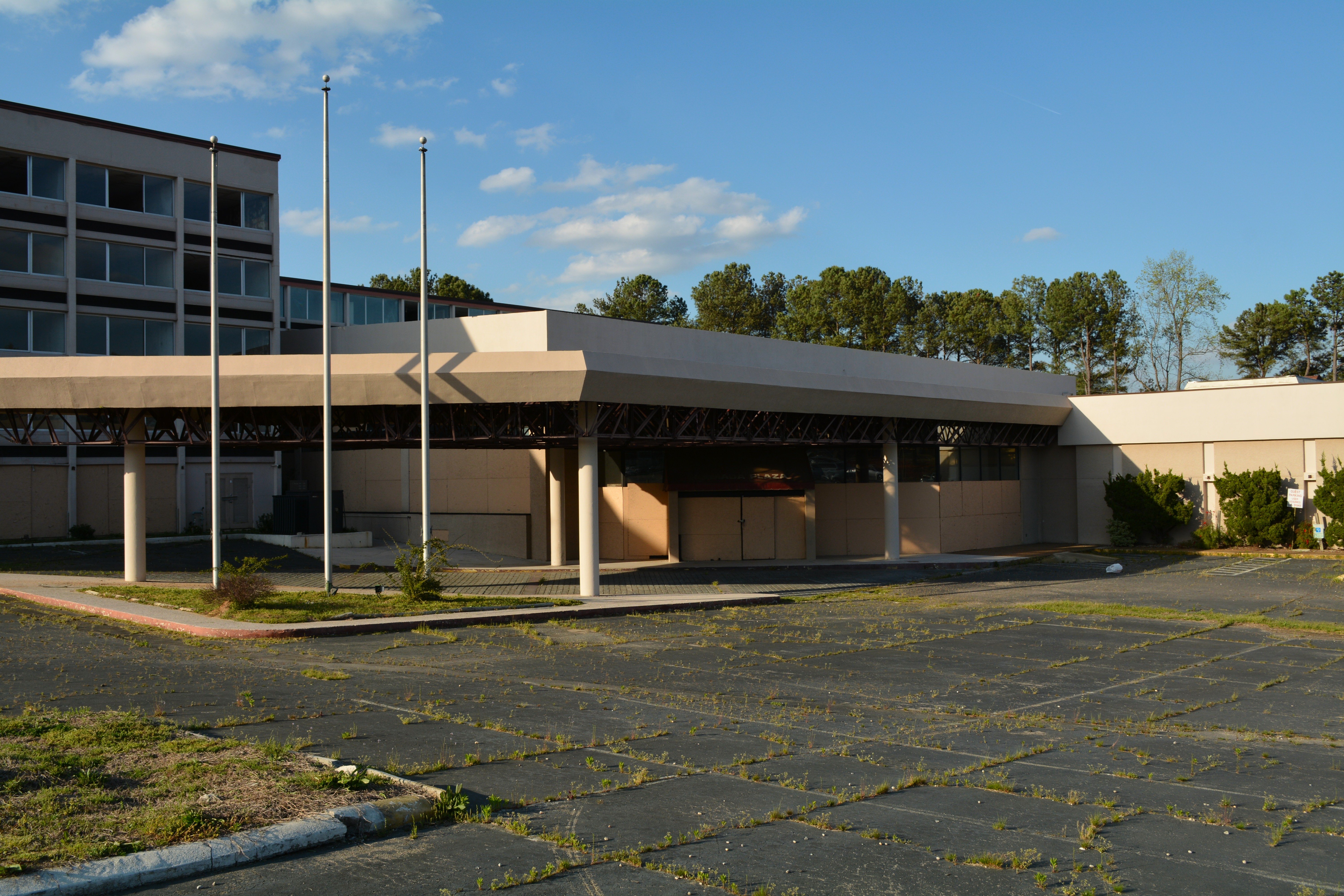 Does this parking lot even count as an impervious surface anymore? 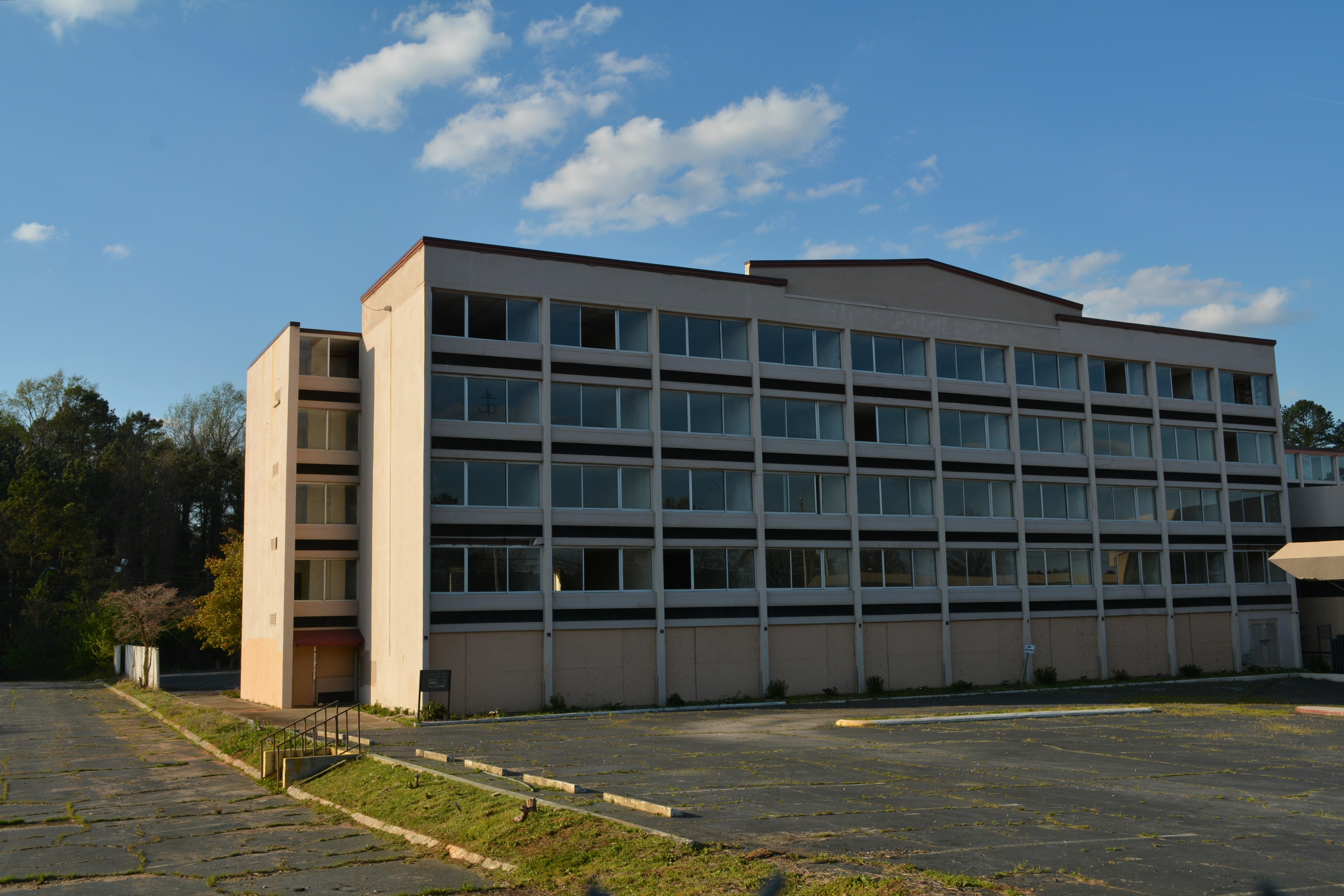 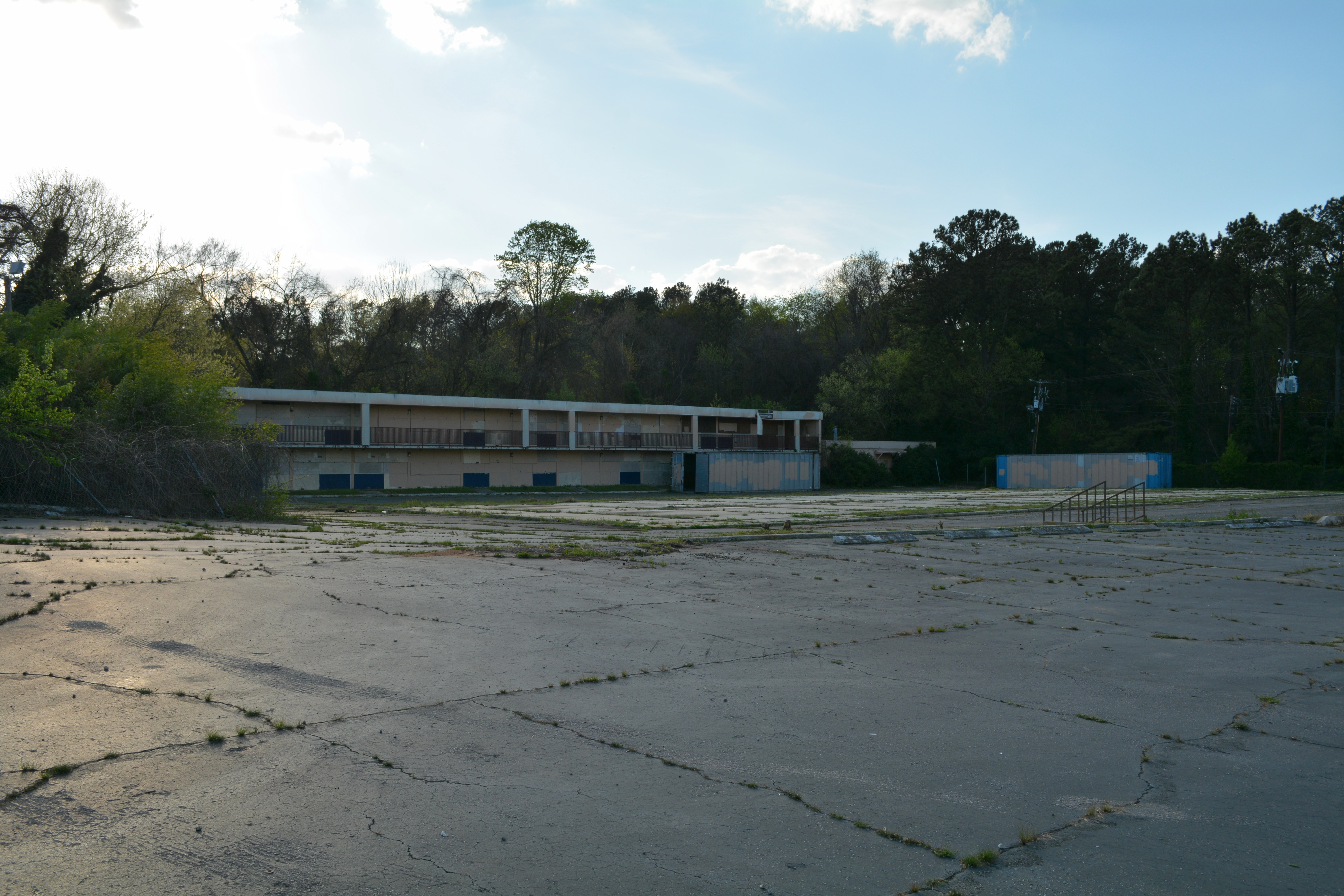 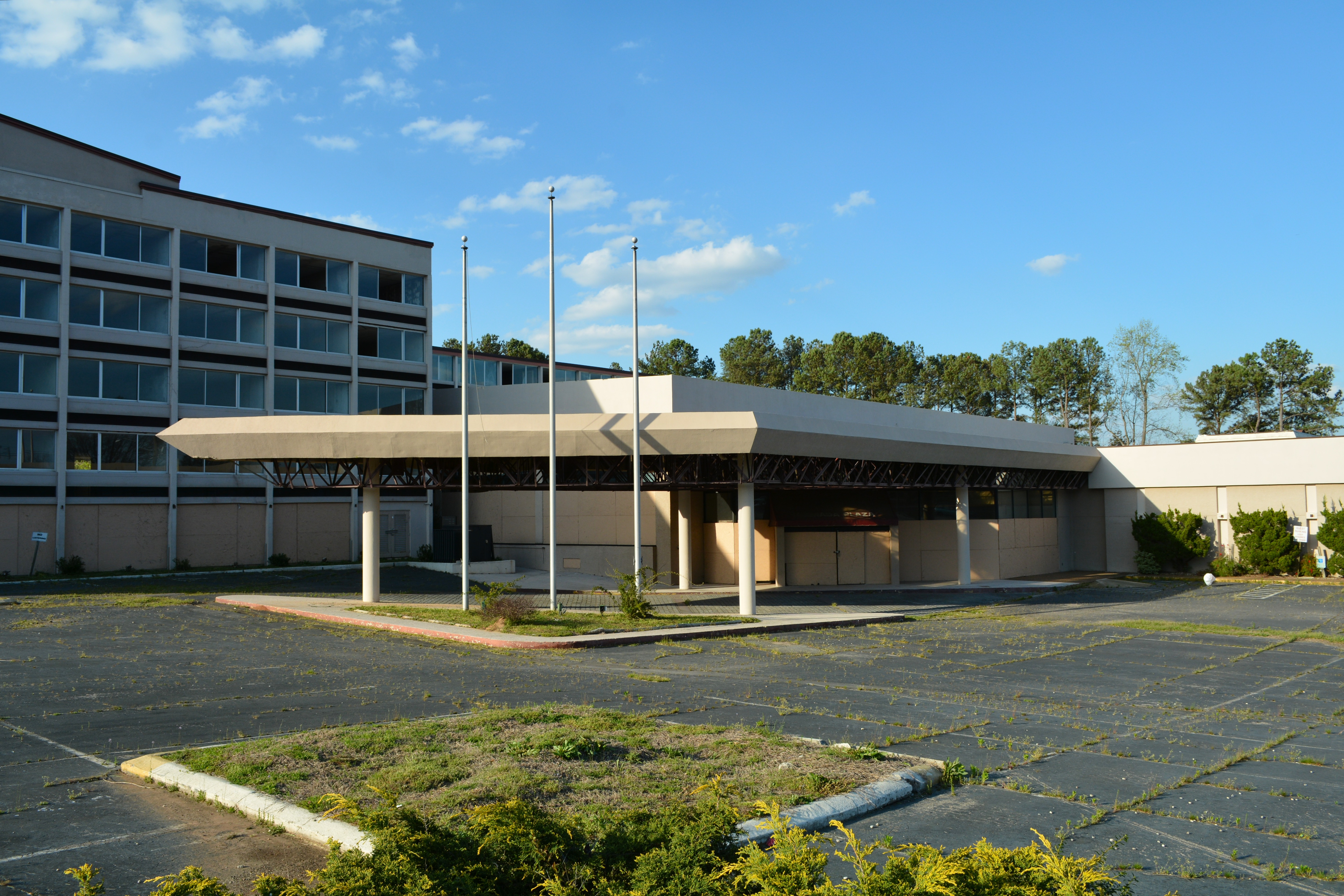 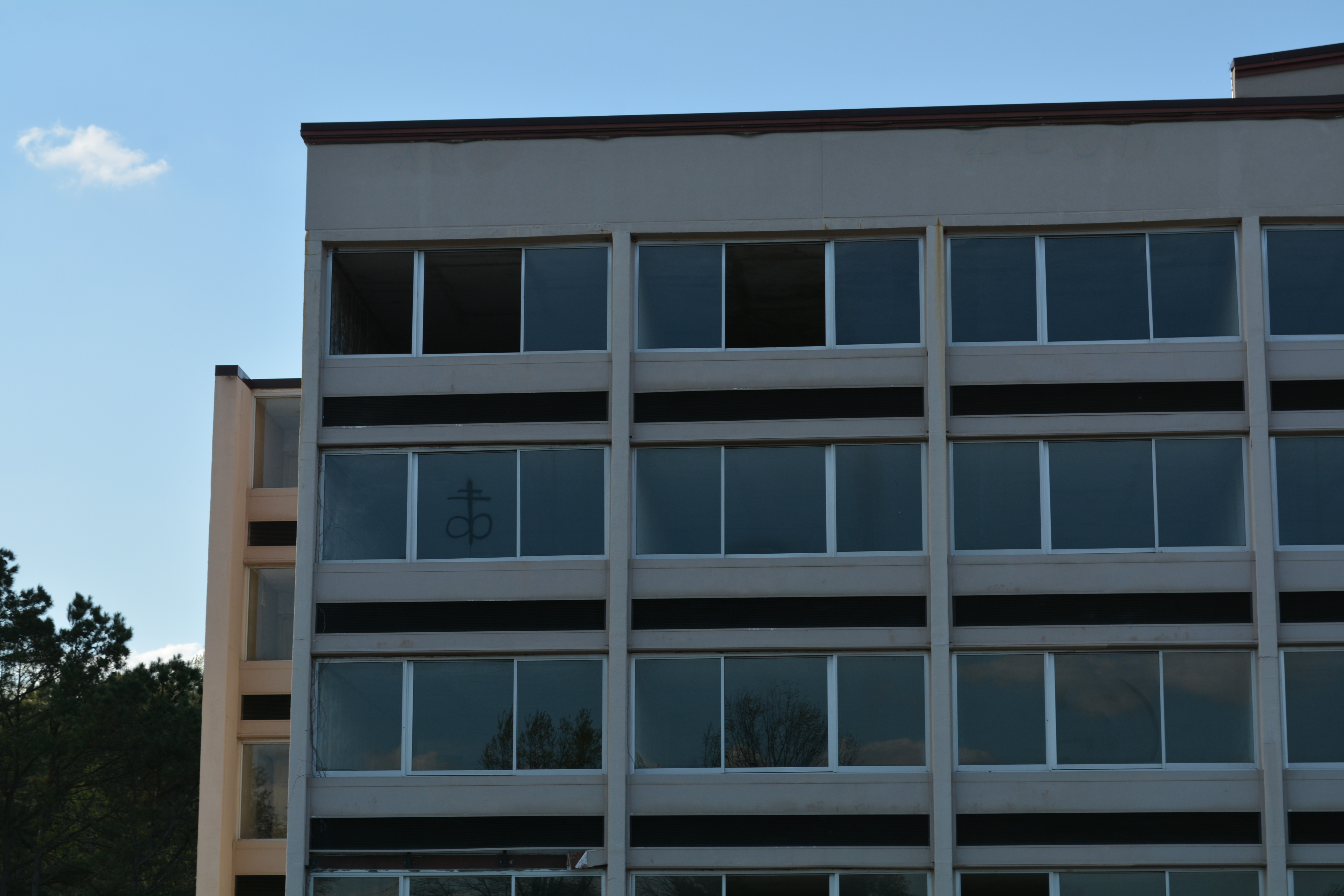 How did that graffiti get there?